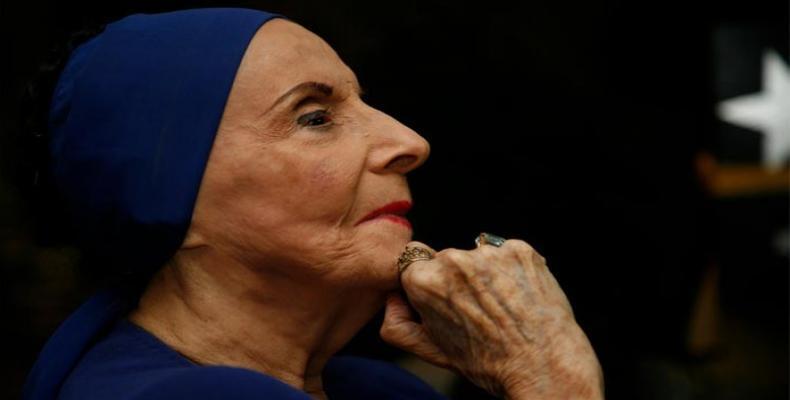 On the occasion of the great Cuban ballerina’s 97th birthday, December 21st, Alicia Alonso remains an inspiration for the hundreds of Cuban ballet dancers who graduate each year on the island’s ballet schools.

Cuban dancer Alicia Alonso is a legend, a famous Cuban and universal ballet star and one of the world’s best known and admired ballerinas, choreographers and teachers. She is the Director of the Cuban National Ballet Company set up in 1948 and the most important dancer in classic ballet in the Spanish speaking world and one of the most outstanding artists in the history of drama.

Alicia, as she is called by all Cubans and fans, was born in Havana on December 21st, 1920. Named Alicia Ernestina de la Caridad del Cobre Martínez del Hoyo, she started her ballet training at the Sociedad Pro-Arte Musical in Havana in 1931 and continued her studies in New York at the School of American Ballet. Alonso began her professional career in Broadway musicals such as Great Lady in 1938 and Stars in Your Eyes in 1939.

Though already suffering from sight problems, the great ballerina was one of the main stars of the Ballet Caravan and later of the American Ballet Theater. In 1939, she was a soloist with the Ballet Caravan, the antecedent of the current New York City Ballet and in 1940, the year of its establishment, Alicia joined the American Ballet Theater. As of that moment, a brilliant and successful career started as a top performer of classic and romantic ballets.

With the Ballet Theater Alonso danced in Antony Tudor’s Undertow in 1945; George Balanchine created his Theme and Variations for her and Igor Youskevitch in 1947, with whom she firmed up a great partnership, and danced in the premier of Agnes de Mille’s Fall River Banks. As a leading dancer of the American Ballet Theater, she went on different European and Latin American tours. Her early contribution to the art of dance in the United States, at the beginning of the development of this artistic expression in that country, has been recognized by many.

Interested in developing ballet on the Caribbean island, she created Cuba’s first professional ballet company in 1948 –the Alicia Alonso Ballet-, called Ballet de Cuba in 1955 and today known as Ballet Nacional de Cuba or Cuban National Ballet Company. At that time, she divided her artistic career between the American Ballet Theater and the Alicia Alonso Ballet. Her own company didn’t have enough and full official support until 1959 when the Cuban Revolution triumphed.

As of 1959, as prima ballerina of the Cuban National Ballet Company, she became the soul of the Cuban School of Ballet, which included figures such as the so called “four jewels” of the Cuban Ballet: Mirta Plá, Loipa Araujo, Josefina Méndez and Aurora Bosh; and Marielena Llorente and Marta García.

She is one of the creators of the famous Cuban School of Ballet, along with her former husband, Fernando Alonso -the schools’ main creator-, and Alberto Alonso. The school has earned admiration by the quality of its teaching and selection system and its members, awarded and praised all over the world.

Due to her impressive artistic career she has received numerous decorations, awards, degrees and designations, including a Doctor’s Degree in Arts at the University of Havana and the Higher Institute for the Arts; the Picasso Medal granted by UNESCO in 1999, which appointed her “good will ambassador.”

In 1993, she was given the Isabel la Católica Order by the King of Spain, Juan Carlos de Borbón; the Republic of France awarded her with the Order of Arts and Literature and the Council of States of the Republic of Cuba named her “Labor Hero” and honored the great ballerina with Cuba’s highest medal – the “José Martí” Order- in 2000 and her country’s Foreign Ministry designated Alicia ambassador of the Republic of Cuba. She created the Dance Desk at Madrid’s Complutense University in Spain and is the President of the Alicia Alonso Foundation based in the Spanish capital.

Alicia Alonso performed during most of her successful career with sight problems or blind; actually she’s been blind for many years during which she danced as a star. She does not dance anymore since the early 1990’s but continues to be an active choreographer and successfully directs the Cuban National Ballet Company.

On her birthday, Alicia Alonso is an inspiration and guide to the new generation of Cuban dancers and artists with a very personal style with which her company, Cuba’s company, has earned a major stature and prestige among the world’s top such ensembles and international dance institutions.