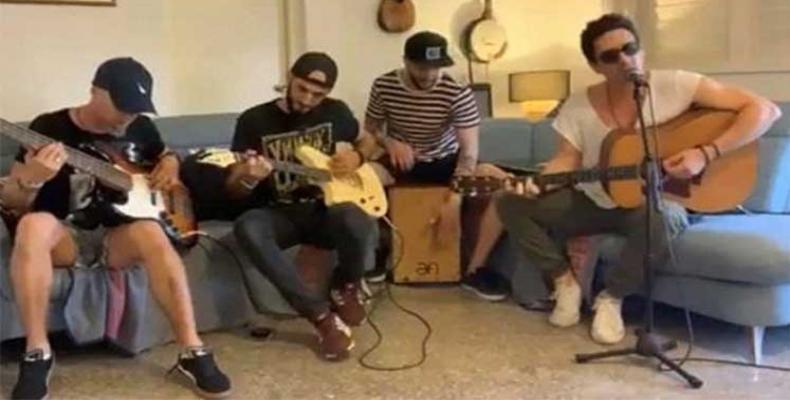 Havana, April 8 (RHC)-- Cuban pop artist David Blanco is working on a new album that he plans to release later this year.

A singer-songwriter, arranger, producer, director and multi-instrumentalist, he has kept very active over the past twelve months since the emergence of the first Covid-19 cases in Cuba, which forced the closure of concert halls and the cancellation of national and international presentations and tours. However, David Blanco, as many other Cuban artists, has used this time to write music, learn how to play other instruments, and delight fans in Cuba and around the world with his art.

He was the first Cuban musician to give a concert online on March 16th, 2020. The successful initiative led to the campaign of online concerts launched jointly by the Cuban Ministry of Culture, the Cuban Music Institute and the Radio and Television Institute, with the hashtags #EstamosContigo #MúsicosPorCuba, aimed at promoting the work of Cuban musicians, while encouraging people to stay home, thus taking care of themselves and their loved ones by contributing to stop the spread of Covid-19.

In statements to the press, David Blanco said that he has also used this time to study, learn how to better play the drums, bass and guitar.

His most recent release was a four-part treatment of a song in evolution from acoustic to electric entitled ‘Fantasmas De Ayer’. The first single version in the series was released in June, 2020.

Likewise, the author of hits like “Vida Libre” and “La Evolución”, participated in the recording of a new version of Queen’s iconic tune “We will rock you”, as a tribute to the legendary British rock band and Freddy Mercury. Other participating Cuban artists include David’s brother Ernesto Blanco, Adrián Barazaín, Jorgito Kamankola, Pedrito Calvo, Kill the party, Dagoberto Pedraja, Osamu Menéndez, Nelson Rodríguez, Ceda el paso and several star instrumentalists.

David Blanco has five studio albums and one live album released in Cuba, a Live DVD set and a sixth studio album in production. He has won a variety of awards including the Cubadisco Album of the year and multiple Lucas Awards for best music video.