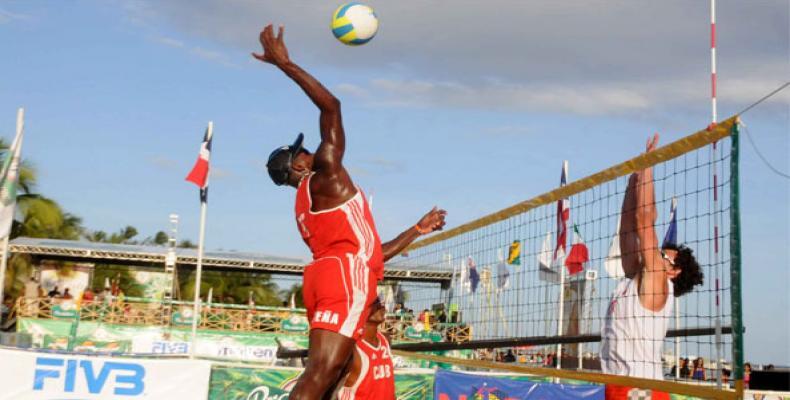 The Cuban men's beach volleyball duo, made up of Karell Peña and Daisel Quesada, will be seeking their third consecutive title on the Confederation of North, Central America and Caribbean (Norceca) Circuit.

Peña and Quesada were crowned in the two previous phases of the contest, held in Mexico and in the Cayman Islands, of the nine scheduled stops this season.

The Cubans have already secured their tickets to the World Championship of this discipline, to be held in the city of Vienna, Austria, from July 28 to August 6, where Cuba will attend with three couples.

Peña and Quesada's will be accompanied in the World Cup by the main Cuban duo - the fifth Olympic ranked - by Sergio González and Nivaldo Díaz, as well as by the female duo of Lidianny Echeverría and Leila Martínez, who also dominated the early stages of the Norceca.

After this third stop of the Norceca beach volleyball circuit in Jamaica, from June 22 to 26, the fourth phase will be played in the famous tourist resort of Varadero, Cuba, from July 12 to 17.

Cuban baseball team lost two runs to one on Wednesday VS the Miners of Sussex County, receiving their tenth defeat in the independent Canadian-American league.

The Cubans, now with a record of 4 wins and 10 defeats, opened the scoring board in the fourth inning by double of the receiver Yosvani Alarcón.

But in the bottom of the sixth inning, the locals made pair of annotations, by simple of the Cuban gardener Ruby Silva and homer from the hands of Jay Baun, against the left-hander pitcher Ulfrido García, who at the end of the day lost the match.

Ulfrido, who takes part for the second consecutive season in the Can Am League, throwed one of his best games in the international arena, after seven innings and a third, allowing only two runs, without giving away tickets.

For the winners, they worked a trio of pitchers, led by left-hander Kris Regas, who worked for six innings to win the win, assisted by rights Elhaj Muhammad, Andrew Brockeett and Kody Kersky, who were allotted the remaining three chapters.

The Cuban team, which for the second consecutive year plays the Can Am league, will begin its penultimate performance this season, when it faces a four-games series against New Jersey.

The final of the VII World Series of boxing will be disputed in the Sports Complex of the city of Astana, capital of Kasajistán, this according to the organizers of the WSB.

The ten-fight program will take place on Saturday, July 15, as previously reported, and will begin at 6:25 a.m. (Cuba time).

The Palace of Sports of Astana was the first scenario where the Cubans faced the locals on the 13 of December of 2013, during the IV World Series, and the match was settled with victory for the visitors by 3 fights to two.

These two franchises, which will go for their third WSB crown, have collided in couple of opportunities and the balance favors the Cubans by 12 wins to eight.