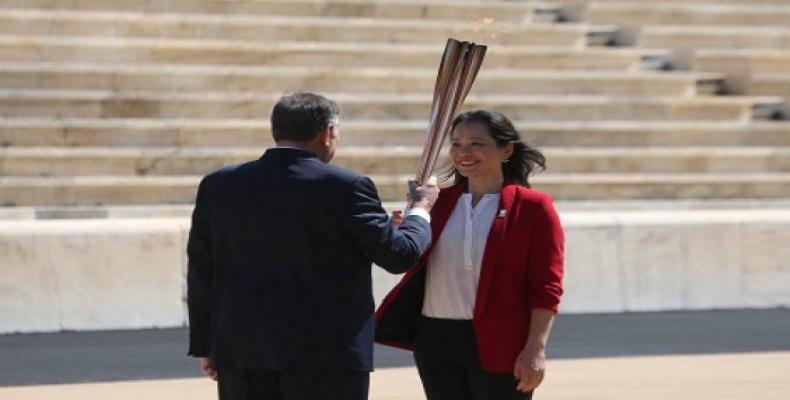 Athens, (RHC) - The organizers of the Tokyo 2020 Olympic Games received the Olympic torch in a ceremony without an audience in the Greek capital.

In a brief, spectatorless ceremony at the Panathinaikó stadium in Athens, where the first Games of the modern era were held in 1896, the Olympic torch was received on Thursday by Tokyo 2020 representative Naoko Imoto.

The flame will arrive this Friday in Japan, where a relay race will start on March 26th. The Games are scheduled to take place between 24 July and 9 August.

The magnitude of the spread of the coronavirus infected more than 200 000 people in 168 countries and recorded more than 8 700 deaths worldwide.

This has led to the cancellation of many sporting events, raising concerns about whether the Games can be held as planned. However, the International Olympic Committee (IOC) and the Japanese government have insisted that the Games be held.

The head of the Greek Olympic Committee, Spyros Capralos, handed over the torch to the former Japanese Olympic swimmer Imoto in front of the empty stands of the 50 000-capacity stadium.

The flame was then transferred to a small receptacle for travel to Japan, on board a specially converted plane called the Tokyo 2020 Go.

Only a few dozen representatives were able to be present at the Athens stadium, because of the strict measures to contain the spread of the virus.

In addition, Tokyo 2020 boss Yoshiro Mori said he hoped the arrival of the Olympic flame would help "remove the dark clouds that are covering the world.

The plane will land Friday at Matsushima Air Base in Miyagi Prefecture before the start of the relay from Fukushima Prefecture, which suffered a major earthquake and tsunami in 2011.