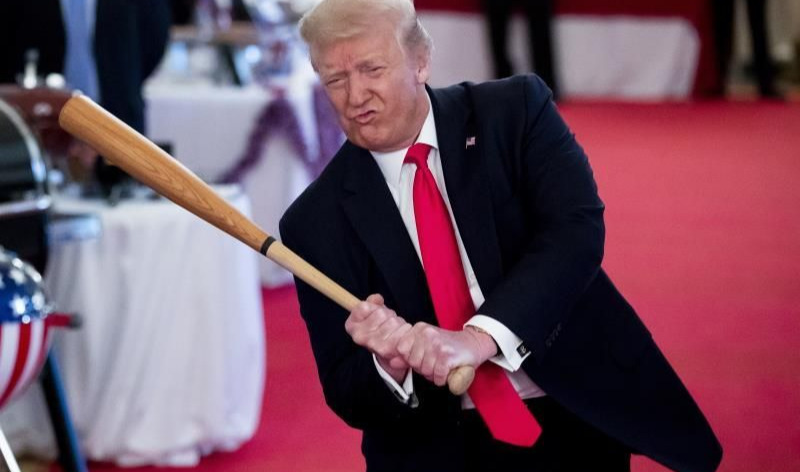 Houston, April 5 (RHC)-- Former U.S. President Donald Trump has called for a boycott of Major League Baseball after they announced the withdrawal of the celebration of the All-Star Game in Atlanta, in protest of the new voting law passed in the state of Georgia.

Through a statement issued by Save America PAC, Trump urged his followers to protest the Major League Baseball decision.   During his term in office, Trump had an ongoing confrontation with the Big Leagues as "politicized" and managers "coerced" by threats from players.

Georgia's new law poses additional impediments to voting by reducing the number of polling places in areas with a large number of African-American residents.  It also allows state intervention to control the course of elections in Democratic counties.  In addition, it reduces the time available for absentee voting and creates new registration requirements that activists say are designed to discriminate against Black voters.

The former president claimed that Major League Baseball's leadership was -- him his words -- "afraid of radical left-wing Democrats," alleging that the party pressured the commissioner, Rob Manfred, to change the venue because of Georgia's new election law, recently signed by Republican Gov. Brian Kemp.

"Baseball is already losing a large number of fans," Trump wrote, "and now they are leaving Atlanta with their All-Star Game because they fear radical left-wing Democrats who don't want voter ID, which is desperately needed, to protect our elections."

During his presidency, Trump repeatedly criticized the National Football League (NFL) for allowing player protests during the playing of the national anthem before games, something he considered an "insult" and "disrespect" to the entire country.

Last year, Trump called the NBA a "political organization" after several teams suspended playoff games in protest of police brutality.  Trump has also defined the NBA as "bought" by China, alleging that the basketball league has favored its own overseas profits over support for pro-democracy policies.

His clash was also with NBA stars, led by Los Angeles Lakers forward LeBron James, who refused to visit the White House while Trump was living there.