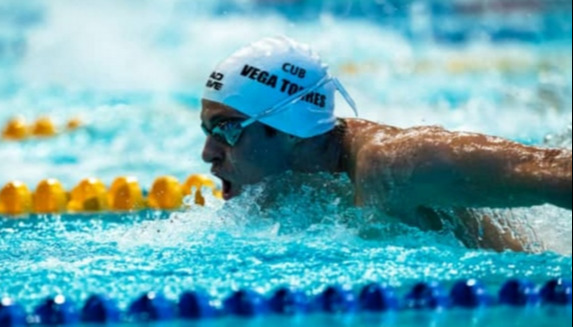 Havana, April 7 (RHC)-- Cuba's Luis Vega set a new national record in the 200-meter butterfly by clocking 1:58.58 minutes in one of the finals of the Russian Olympic qualifying championship based in Kazan, where he is fulfilling the scholarship granted by the International Swimming Federation (FINA).

Vega shattered his own record of 1:59.23 that he set at the Barranquilla 2018 Central American and Caribbean Games, which certified him the bronze metal, as well as becoming the first on the island to go under two minutes in that event.

"I am very happy, it is the event in which I am more focused for being the one with the greatest option to qualify for the Tokyo Games," the young man from the capital expressed to JIT.

"With this time I improve even more the B mark, but my goal is to fight for the A, which is 1:56.48 and with which you get the direct ticket to Japan, it is strong but not impossible," he added.

Despite the training irregularities in 2020 due to the COVID-19 pandemic, Luis went down in December in Havana to 1:58.98, but that could not be homologated as a national record because he did it during a control test and together with others who swam free.

In Kazan - where the most outstanding Russian swimmers participate - the West Indian newt made his debut on Saturday in the 400 individual medley, an event in which he achieved a lifetime best by clocking 4:25.77 minutes.

"I felt pretty good, however I did not expect that result because I had not trained this event for a long time, I am focused on my preparation for the 200 butterfly, plus I got that time, which is also a source of satisfaction," he said while announcing that he will compete on Wednesday in the 200 combined and on Thursday in the 100 butterfly.

Her teammate, Lorena González, who also has a scholarship at the International Center of that Russian city, competed in the 200 freestyle, which she swam in 2:08.26 minutes.

"Despite not beating her personal quota of 2:04.35 for the moment her performance today was positive after only five weeks training in Kazan, since she had to complete her quarantine before. She has improved and is reaching her sporting form", commented Nelson García, national commissioner in this capital.

The 20-year-old Spiritian explained that "I felt pretty good and although I made an effort I could not reach my time, but compared to what I did in a previous competition here I lowered four seconds, in my opinion it is not bad, I am just adapting to the environment and functioning here. On Wednesday I compete in the 100 freestyle".

The Cuban swimming executive himself revealed that both athletes will have another championship in Russia from June 3 to 5. It will not be an Olympic qualifier, but it will be very beneficial for Luis in his battle to reach Tokyo.

"The same for Lorena, who is looking for the A mark to ensure her presence at the Junior Pan American Games in Colombia next September and then she will return to Kazan with a view to her qualification for the Short Course World Championships, scheduled for December."

The ondina competed on Saturday in 100 butterfly, section that she consumed in 1:03.83 minutes, but she is confident that she will be getting closer to her most outstanding record, 1:02.69, in fact the national primacy, which she took possession of in 2019.