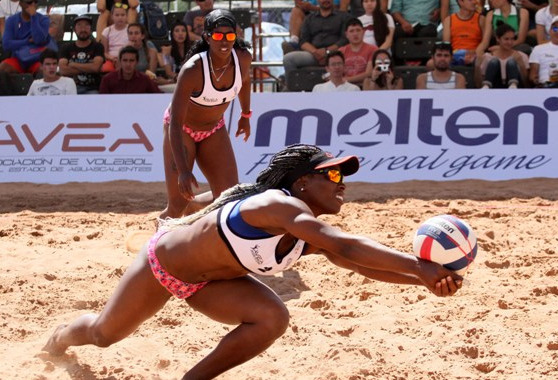 Cancun, April 22 (RHC)-- Cuba's duos of Leila Martínez-Maylen Delís and Lidianny Echevarría-Yanileydis Sánchez are playing in the second stop of the world beach volleyball circuit, based in Cancun, Mexico.

According to the website www.fivb.com, the Martinez-Delis duo will be in action on the sands of the Mexican resort against the Dutch Schoon-Stam, while Echeverria-Sanchez will play against the Lithuanians Dumbauskaite-Grudzinskaite.

If they win, the main Cuban duo will plays against the winner of the match between the Greeks Arvaniti-Karagkouni and the Mexicans Cruz-Cortes.  The same will happen with Echeverría and Sánchez, but against the winners of the match between Finland's Parkkinen-Ahtiainen and Colombia's Andrea-Gorda, as part of the first round of the four-star category event that awards ranking points.

For the registrations of this second stop, the tournament has the participation of 60 couples from 27 countries.   The United States, with six pairs (m and f), as well as Brazil (5), Mexico and Holland (4), and Canada, Russia and Japan (3).

In the previous and recently concluded first phase in Cancun, the duos of Martinez-Delis and Echeverria-Sanchez were eliminated in the round of 16, so they finished in ninth place and 400 points, with the first four places going to duos from Brazil, with 800 units, Mexico (720), Brazil (640) and Germany (560), in that order.

Cuba's duos will also compete in the third stop in Cancun, scheduled to take place from May 28th to June 1st, as well as in Sofia, Bulgaria, from May 20th to 23rd.

These competitions will be used to score points for the Americas ranking for the Tokyo 2020 Olympic Games, postponed to next summer, and the pre-Olympic of the Confederation of North, Central America and the Caribbean (Norceca), also to be held in Mexico, from June 24 to 27.

To attend Tokyo it is mandatory to accumulate 12 tournaments, a figure that Martinez and Delis will meet in the Bulgarian league.