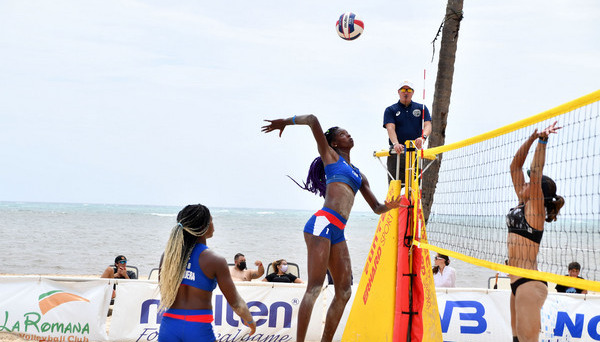 Havana, October 22 (RHC/JIT)-- The pairs of Luis Enrique Reyes-Noslen Diaz and Lazara Madan-Dayani Zerquera will represent Cuba in the beach volleyball tournament of the First Pan American Junior Games of Cali 2021, which will take place from November 25 to December 5.

On that occasion, Matanzas' Reyes and Artemio's Díaz won the gold medal, while the capital's women came in fourth place. The competition granted tickets to the Colombian event to the first six pairs in each gender.

An equal number qualified for Cali from the South American zone, headed by Brazil, Argentina and Colombia, undoubtedly among the favorite countries to reach the podium. As for Cuba, the men's team can repeat its outstanding performance in the Dominican Republic, according to experts.

The four players are currently training at the National Volleyball School, where the fifth week of general training is about to conclude. In early November they plan to begin the special stage, according to Osvaldo Abreu, the veteran coach who trains the girls, who told JIT.

"They are all training with a very high disposition, they feel committed to perform well, although this will be their second competition in nearly two years due to the covid-19 pandemic," he said.

Abreu pointed out that obviously the men have more options. Reyes is under 23 years old, but had a positive experience as a partner of star Sergio Gonzalez, fifth place in the Rio 2016 Olympic Games and now retired. Nevertheless, the fair will be difficult, as many countries have quality players.

"My students grew up in Punta Cana and came to discuss the bronze metal. That was their international debut because not even in Cuba had they participated in any Varadero phase of the Norceca Circuit. We have worked on their difficulties, mainly in attacking and serving," he stressed.

Between strong sessions in the sand court of the national center, as well as in the gymnasium, our beach volleyball players perform every Saturday tops against other couples that help their preparation.

In spite of the inconveniences since 2020 to fulfill a stable training, and the impossibility to compete, they are determined to play a decent role.