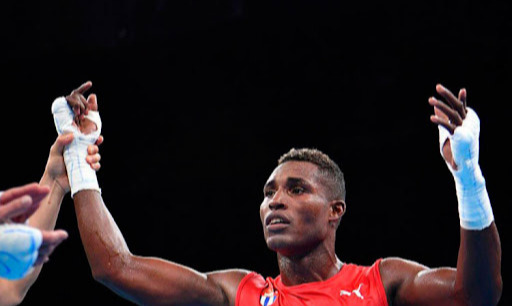 Cuba's team captain, Julio Cesar La Cruz, beat Iran's Toufan Sharifi 5-0 today and advanced to the quarterfinals of the World Boxing Championship to be held in Belgrade until November 6th.

La Cruz, a double Olympic titleholder, carried the pace of the actions to add a new triumph on his way to the fifth universal title of his career, after those achieved in the 2011, 2013, 2015 and 2017 versions.

In his next outing, the native of the Cuban province of Camagüey will face the winner of the duel between local Sadam Magomedov and Bosnian Dzemal Bosnjak.

Earlier, the debutant Herich Ruiz in the 86 kilograms, gave Cuba another victory, then by 4-0 over Jordan's Adel Alhindawi.

Ruiz, a native of the special municipality of Isla de la Juventud, dominated his opponent from medium and long distance, with accurate combinations that decreed in his favor the credit of 29-27 of four of the judges, while one saw the fight even 28-28.

This was Ruiz's second success in the tournament after the one achieved by forfeit over the Serbian Slobodan Jovanovic in the debut.

In the quarterfinals, the "islander" will face the challenge of Turkey's Burak Aksin, 5-0 winner over Germany's Alexander Okafor. After this result, Cuba has 12 wins and two losses with six men in competition, who will strive to improve the performance in the version of Ekaterinburg, Russia 2019, when they totaled a metal of each color.

Tomorrow, Tokyo 2020 Olympic champion Andy Cruz in the 63.5 kilograms and debutant Yoenlis Hernandez in the 75 will seek to advance to the quarterfinals.

Cruz, also a double world titleholder at 63 kilograms, will measure forces with American Vershaun Lee, who arrives encouraged by his knockout victory over Trinidadian Blessing Waldropt.

To get here, the Cuban native of the western province of Matanzas, won 5-0 over Jonathan Miniel of Panama and Nicolas de Jesus of Brazil, respectively.

For his part, Hernandez will face India's Sumit, who also defeated Jamaica's Damon O'Neill and Tajikistan's Abdumalik Botaev by unanimous vote of the judges.

The native of Camagüey, top of the list with two 5-0 wins over Brazil's Wanderlei Pereira and Turkey's Birol Aygün.