Second group of the delegation to Cali 2021 returns to Havana 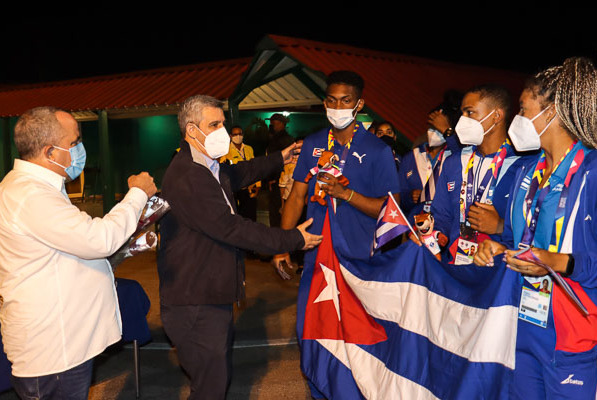 The second large group of the Cuban delegation participating in the First Junior Pan American Games of Cali 2021, in Colombia, arrived today in Havana and was received by leaders of the Government and the Communist Party.

Havana, December 7 (RHC)-- The second group of the Cuban delegation participating in the First Junior Pan American Games of Cali 2021, in Colombia, arrived today in Havana and was received by leaders of the Government and the Communist Party.

Jorge Luis Broche, member of the Secretariat of the Central Committee of the Communist Party of Cuba and head of the Department of Education, Sports and Science, and Deputy Prime Minister Jorge Luis Perdomo greeted the members of the Cuban athletic embassy at terminal five of José Martí International Airport, notes the sports weekly JIT.

Karla Santana Rodríguez, president of the University Student Federation (FEU), was in charge of the welcoming remarks, in which she congratulated all the members of the delegation, especially the athletes who won a total of 70 medals (29-19-22) in the multisport event, held in the capital of Valle del Cauca.

He also highlighted the enjoyment caused to the Cuban population, especially teenagers and young people, thanks to the performances broadcasted by the media and through social networks on the Internet.

Boxer Ronny Álvarez Noa, 91 kilograms (kg) champion, expressed on behalf of the athletes the honor of having represented the homeland in the continental competition, highlighted the dedication and discipline exhibited, and also the affection with which they were treated by the hosts and the people of Cali in general.

Arnaldo y su Talismán provided the musical notes for the ceremony, which was attended by Roberto León Richards, president of the Cuban Olympic Committee, and several leaders of the Cuban sports organization. Osvaldo Vento Montiller, head of the National Institute of Sports, Physical Education and Recreation, and head of the Cuban mission in Cali 2021, arrived at the front of this group.