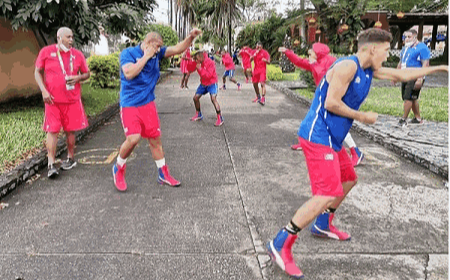 Havana, November 26 (RHC)-- Cuba did not need to wait for the opening bell to get three bronze medals that opened the doors to the medal standings in the boxing tournament of the I Pan American Junior Games Cali 2021.

The draw decided that Luis Reynoso (81 kg), Ronny Álvarez (91 kg) and Adrián Fresneda (+91 kg) would debut in the quarterfinals in divisions that gather seven and five contestants, respectively, which allowed them to celebrate in advance, although everyone's eyes are on the future.

In the town of Buga, sub-host for this fight, the Cuban federator Alberto Puig de la Barca highlighted that the seven boys who arrived there have trained hard, determined to contribute to the excellent international season of their sport.

"The dedication and discipline that characterized the work in Havana is still evident here, and there is a very positive atmosphere, without that meaning overconfidence," he said about the squad that this Friday will have only one competitive commitment.

The one in charge of turning it into a victory will be Ewart Marín (52 kg), against the Salvadoran Steven Francisco Rodríguez in the second of the 10 bouts to be held from 2:00 p.m. at the Luis Ignacio Álvarez Coliseum.

Also convened for the women's sector, the competition has the additional incentive of awarding places for the Pan American Games of Santiago de Chile 2023, available for the divisions in which the championships are won.

In other words: unlike what has traditionally happened in this discipline, the winners will contribute quotas to their countries, without "names", an aspiration often cherished in the face of major multisport events.

The other registered Cubans are Jorge Forcades (69 kg), Pavel Echaide (57 kg) and Kryhztian Barrera (75 kg), with the first one scheduled to face on Saturday the winner between the Argentinean Dustin Castro and the Brazilian Alisson Peixoto.