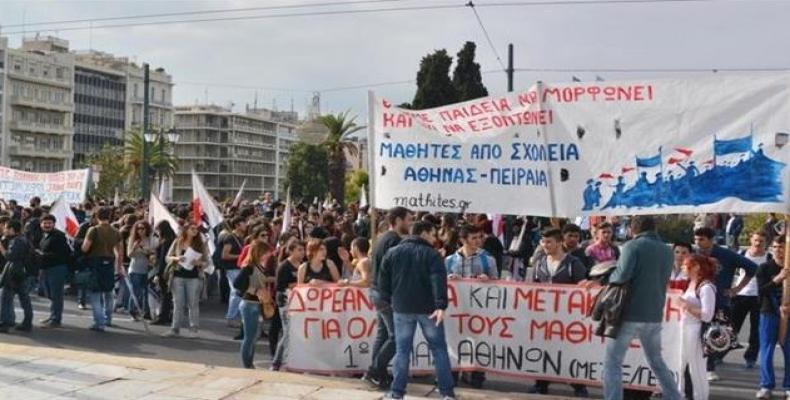 Authorities said about 1,000 protesters took part in the demonstration which was joined by teachers dissatisfied with education cuts as part of the EU-imposed austerity program.  The cutbacks have seen classroom hours reduced and fewer teachers hired despite a shortage of “teaching gaps” at schools.

The government reportedly plans to further merge, and in some cases, abolish school departments in order to cut costs and abide by the latest austerity plans.

Greece has been rocked by riots and industrial action in protest at the austerity policies which are dictated by the European Commission, the European Central Bank, and the International Monetary Fund.

The austerity program has plunged Greece even further into penury, limiting its prospects for long-term recovery.  The current government of Prime Minister Alexis Tsipras came to power in 2015 on a pledge to tear up austerity agreements, but was forced to reverse course and agreed to additional austerity in return for a loan of 86 billion euros.

The new bailout program, agreed amid much bitterness in July 2015, is set to end after three years. Greece has already received two bailouts worth 240 billion euros in 2010 and 2012 following the economic crisis which began in 2009.

Eurozone finance ministers agreed in late May to give Greece access to a 10.3-billion-euro tranche of the third bailout funds.  On Monday, however, Eurogroup head Jeroen Dijsselbloem and German Finance Minister Wolfgang Schaeuble warned it would be impossible to draw up fresh debt relief for Greece by year's end.

The IMF has also said it won't give a penny to the latest bailout program until it sees a concrete plan from the Europeans to cut Greece's massive debt burden, which it says is unsustainable.

The new decision by EU finance ministers in Brussels poured cold water on Tsipras’s hopes that the eurozone would keep its part of the pledge regarding the unpopular cuts he vowed to adopt in exchange for relief and debt viability.

The Greek prime minister is trying to convince the voters that years of austerity would finally bear fruit and the country could see a major economic rebirth in the future.