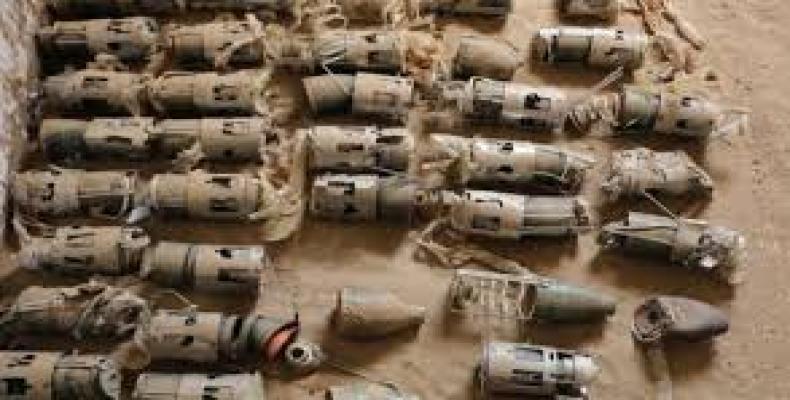 Riyadh, December 21 (RHC)-- Saudi Arabia has admitted to the use of banned cluster bombs during its relentless airstrikes on Yemen.  "It has become apparent that there was limited use by the coalition of the UK-manufactured BL755 cluster munitions in Yemen," said a spokesman for the Saudi forces in Yemen, Ahmed al-Asiri.

He went on to claim that the bombs were only used against legitimate military targets and that the kingdom was not part of the convention banning the use of such munitions.

"Some states have undertaken a commitment to refrain from using cluster munitions by becoming party to the 2008 Convention on Cluster Munitions.  Neither Saudi Arabia nor its coalition partners are states parties to the 2008 convention, and accordingly, the coalition's use of cluster munitions does not violate the obligations of these states under international law," he said.

He noted that Riyadh has decided to stop the use of cluster bombs and that it has informed the British government of its decision.  The Saudis' announcement came after a British Defense Ministry inquiry showed the Riyadh had used UK-supplied cluster bombs in Yemen.

Earlier this month, Yemen's Prime Minister Abdulaziz bin Habtoor accused Britain of committing war crimes.  "They have sold cluster bombs to Saudi Arabia," the new premier told Sky News.  "They know the Saudis are going to drop them on Yemen ... in Saada and in Sanaa and other provinces. I don't think they are guilty of war crimes, I believe so.  They are participating in the bombing of Yemen's people."