Demonstrations in Okinawa Continue Amid U.S. Military Base Relocation 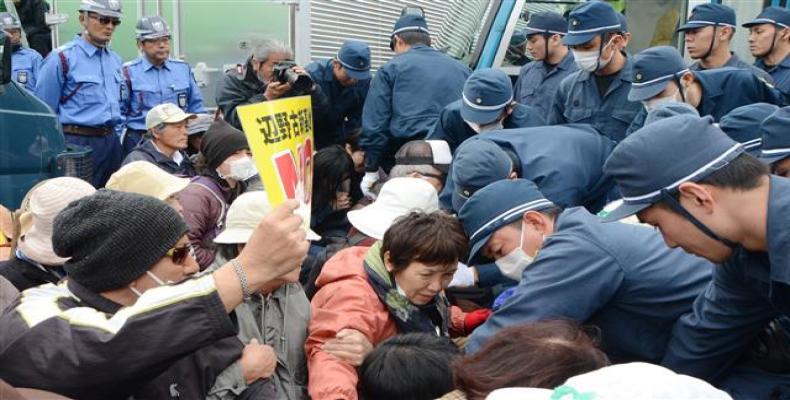 Tokyo, February 7 (RHC)-- Japanese police have scuffled for the second day in a row with protesters demonstrating against the relocation of a U.S. military base on the southern island of Okinawa.

The central government plans to move the base away from Futenma to a less populated part of the island called Henoko, but Okinawa Governor Takeshi Onaga has led a campaign to get the base off the island completely.  The protests are currently focused on a landfill project which the government says is required for relocation.

Local residents and environmentalists are furious, saying the new airbase will destroy reefs and harm marine life in a relatively untouched part of Okinawa, and add to noise and crime.  Footage posted on social media on Tuesday showed protesters, many of them elderly, being removed by police officers from what appears to be a sit-in protest.  In another video, a man in a wheelchair is seen being pulled away from the protest by police, as fellow protesters denounce the authorities for manhandling a disabled person.

The Japanese and U.S. governments have pursued the relocation of the base in the face of frequent protests by residents against noise problems, accident risks and serious crimes such as rape by American troops.

In 1995, the abduction and rape of a 12-year-old girl by three U.S. soldiers triggered huge protests, prompting Washington to pledge efforts to strengthen troop discipline to prevent such crimes and reduce the U.S. footprint on the island.

The central government says the base in Futenma is one of the "most dangerous airports in the world" because it is in densely populated area.  Okinawa residents, however, want the base to be dismantled permanently.  The construction work related to the relocation is about to be carried out in the next five years but the Okinawa governor has pledged to keep trying to ban it with all possible means at his disposal.

The U.S. military presence in Japan exceeds 100,000 people, with more than half of the troops deployed in Okinawa.  American military bases in Japan are a key part of the security alliance between Washington and Tokyo but they are also a poignant reminder of the Asian country's defeat after the atomic bombing of Hiroshima and Nagasaki.