Japanese Protesters Rally Against Relocation of U.S. Air Base to Okinawa 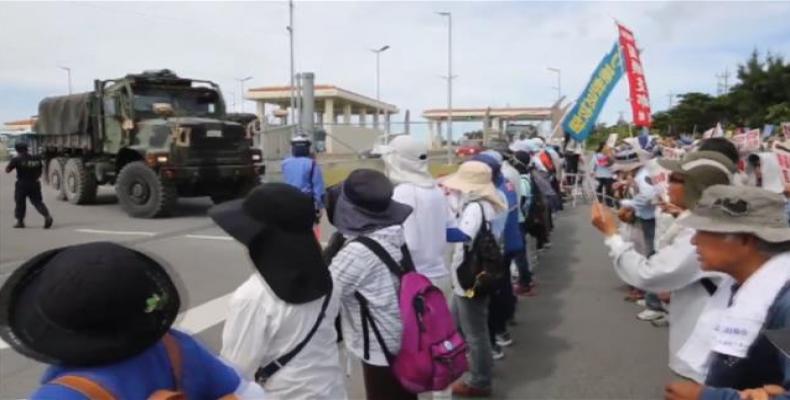 Tokyo, July 13 (RHC)-- Japanese protesters have held a rally in front of the American Camp Schwab Marine Corps camp on the island of Okinawa in protest at a planned relocation of yet another U.S. military facility to the area.

Demonstrators lined the road leading to the marine base in Henoko area near Nago City on Thursday, chanting slogans against the plans and holding placards decrying the U.S. military presence.

According to the relocation plan, an air base will be built in the waters off the coast from Camp Schwab over the next five years as part of the relocation of the Futenma Air Station to the Henoko area.

Local residents and Okinawa Governor Takeshi Onaga have continued to express their opposition since the plan was announced.

According to U.S. Forces Japan, nearly half of 100,000 U.S. troops in Japan reside in Okinawa.  Okinawa has become known as a source of enduring concern for the Japanese people.  Pacifist inclinations as well as security and safety concerns have prompted the Japanese to protest against the US military presence in Japan from time to time.

Multiple cases of misconduct by U.S. forces have also raised anti-American sentiment among the islanders.

In April 2016, a U.S. Marine murdered Rina Shimabukuro in Okinawa.  The 20-year-old victim, who worked at the base, was raped, struck in the head, and stabbed to death.

Back in 2013, two American sailors admitted to raping another woman in Okinawa in the previous year in a case that sparked massive protests.

In 1995, the abduction and rape of a 12-year-old girl by three U.S. servicemen also triggered huge protests, prompting Washington to pledge efforts to strengthen troop discipline to prevent such crimes and reduce U.S. presence on the island.