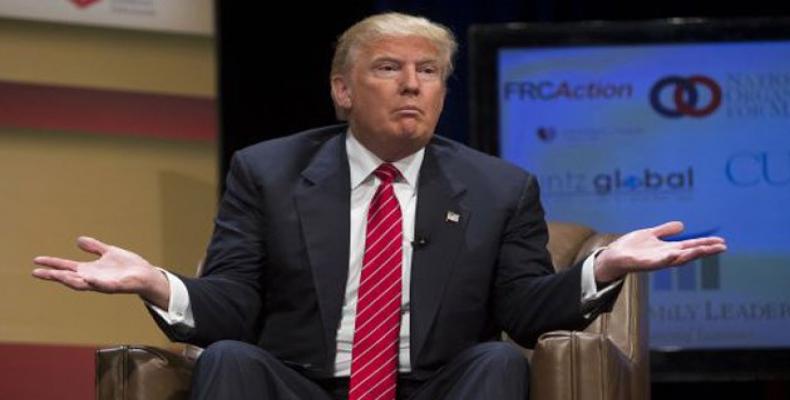 Washington, February 27 (RHC)-- A majority of Americans feel embarrassed by the administration of President Donald Trump, a new opinion survey has found.  Fifty-eight percent of respondents use the word "embarrassed" to describe how they feel about Trump's first month in office, according to a McClatchy-Marist poll released Thursday.  Only 33 percent say Trump's actions so far make them feel proud.

Nearly half of Americans, 49 percent, disapprove of the job Trump is doing, while 41 percent approve.  Trump is seen in a negative light overall, with only 38 percent of Americans viewing the new president favorably.  A majority, 54 percent, have an unfavorable opinion of Trump.

More than half of those surveyed also believe that at least one of Trump's actions as president has been either illegal or unethical.  Many expressed concern about Trump's potential conflict of interest with his business interests in foreign countries.

"He is generating benefit to his enterprise," said Matt Boyer, a think tank researcher from North Carolina.  "The rest of the executive branch can't participate in this behavior."

A Quinnipiac University poll released Wednesday puts Trump's approval rating at only 38 percent, the lowest since he took office on January 20.  "President Donald Trump's popularity is sinking like a rock," said Tim Malloy, an assistant director with Quinnipiac.  "He gets slammed on honesty, empathy, level-headedness, and the ability to unite. And two of his strong points, leadership and intelligence, are sinking to new lows," he added.

Since his inauguration, Trump has faced nearly non-stop protests and rallies condemning his divisive rhetoric and controversial immigration policy.