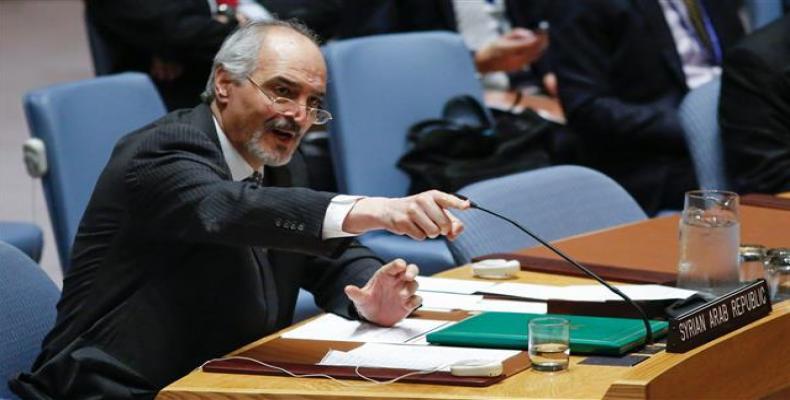 The UN Security Council yesterday voted on a resolution drafted by Britain, France and the United States that urges the Damascus government to cooperate with an investigation into an alleged chemical weapons attack in Syria.  Russia vetoed the resolution,saying that accepting it would have legitimized the U.S. airstrike on the Syrian airbase from where Washington claims jets took off for the chemical attack.

The new motion was the revised version of last week’s three separate draft texts proposed by London, Paris and Washington that condemned the purported gas attack on the town of Khan Shaykhun in Syria’s Idlib province on April 4th and demanded a full investigation into the incident.

The Syrian envoy said his country invites the Organization for the Prohibition of Chemical Weapons (OPCW) to conduct an investigation into Idlib chemical assault, emphasizing that his country wants to find perpetrators of the attack.  Ja'afari said the West and some regional countries provide the terrorists fighting in Syria with chemical weapons.  And he added that his country has time and again informed the UN about terrorists possessing chemical weapons.

At the UN Security Council meeting on Wednesday, UN Special Envoy for Syria Staffan de Mistura denounced the alleged chemical attack in Idlib.  He said violence and fighting have escalated since the U.S. launched a missile attack on a Syrian airbase in Homs province following the chemical attack.

U.S. warships deployed to the eastern Mediterranean launched a barrage of 59 Tomahawk missiles against Shayrat Airfield, southeast of the western Syrian city of Homs, on April 7.  Washington, without providing any evidence, claimed the attack came in response to the alleged chemical attack by the Syrian government in Khan Shaykhun.

The Russian envoy also expected that Geneva peace talks will continue more actively.  The fifth round of the peace talks was held in March under the UN auspices.  He also said Moscow insists that the Syria talks must be held without preconditions, noting that there is no room for terrorists in the negotiations.

Safronkov also slammed Britain for supporting the interests of armed terrorist groups in the Middle East. The Russian official urged the UK not to interfere with UN peace efforts in Syria.  The Russian envoy also called for more investigations into the alleged chemical attack.

Western countries rushed to blame the government of Syrian President Bashar al-Assad for the Khan Shaykhun incident without providing any evidence to support their accusations.  Syria’s Foreign Minister Walid al-Muallem said Damascus did not and would not use chemical arms, even against terrorist groups.  He said the Syrian military had carried out an airstrike on a depot where terrorists stored chemical weapons.

Iran and Russia have called for an impartial investigation into the chemical incident.