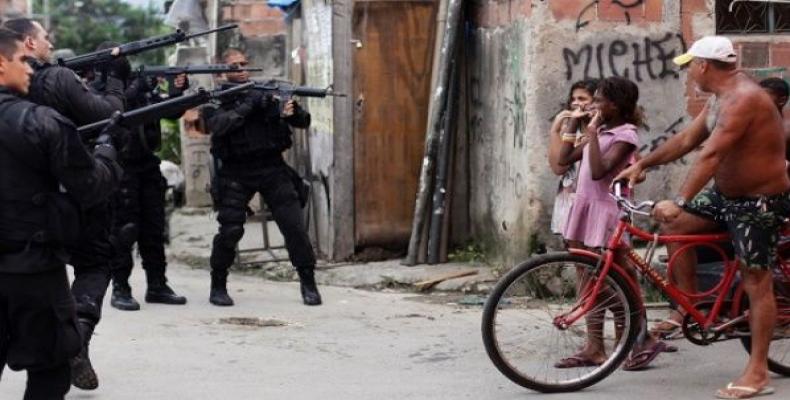 London, May 5 (RHC)-- Just one day before the United Nations was set to assess the state of human rights in Brazil, Amnesty International sent a report Thursday to the body, slamming the country’s exorbitantly high rate of police killings, mostly against young Black men.

Since Brazil was last reviewed during the U.N.’s Universal Periodic Review in 2012, police killings have more than doubled, with 419 people murdered in 2012, and a staggering 920 in 2016. In the first two months of 2017, the country has already seen 182 fatal instances of police brutality.

“Since the last review at the United Nations, Brazil has not taken enough steps to tackle the shocking levels of human rights violations across the country, including soaring police homicide rates that leave hundreds of people dead every year,” said Jurema Werneck, executive director at Amnesty International Brazil, in a statement released by the organization.

“Very little has been done to reduce the number of homicides, to control the use of force by the police, or to guarantee Indigenous rights as claimed in Brazil’s Constitution. UN Member States must make clear to Brazil that this has to change,” she added.

Brazil is the country with the highest number of homicides in the world, with nearly 60,000 people killed in the country in 2015.  The majority of victims are young Black men.

That same year, police in Rio de Janeiro were responsible for one in every five killings, while in São Paulo, the rate was one in four.  Many of the police killings may amount to extrajudicial killings, which is a crime under international law.

According to Robert Muggah, research director of the Igarape Institute, a security and justice think tank in Rio, the country’s economic and political crisis and “a deep crisis of leadership” are among the factors that has exacerbated the violent conditions.  Last year, unelected President Michel Temer was installed in an impeachment process widely condemned as a parliamentary coup against former President Dilma Rousseff.

“You have a deeply distressed and exasperated population who see the police as an enemy, not as a servant to the public good.  This creates a very antagonistic relationship.  It’s worsened by the routine egregious use of force caught on film,” he told The Guardian.  Protests against the Temer government and highly unpopular policies such as pension reform and a 20-year public spending freeze have at times faced police repression.

The Amnesty International report also raised concern about violence against Indigenous peoples in conflicts over issues of land.  Most recently, Brazilian military police attacked thousands of Indigenous tribe members in front of the country's Congress in Brasilia while protesting for greater rights.

Several demonstrators attempted to occupy the pond in front of the congressional office and were met by police who used rubber bullets, pepper spray and flash bombs to disperse the crowd.  In response, Indigenous protesters shot arrows at the police and in the direction of Congress.

A report in January also found that police killings in Brazil added up to almost 10 people per day.