Over 8,000 Migrants Rescued in Mediterranean in 48 Hours 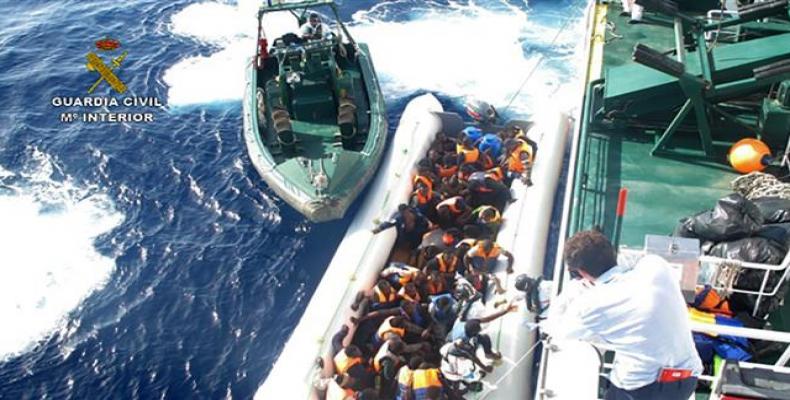 Rome, June 28 (RHC)-- More than 8,000 migrants have been rescued in waters off Libya during the past 48 hours in difficult weather conditions, Italy's coastguard said Tuesday.

"On Monday, we rescued about 5,000 people from four large boats, one smaller one and 18 rubber dinghies," a spokesman told AFP.

People were pulled to safety by coastguard vessels, military ships operating under the EU's border agency Frontex and aid boats run by privately funded organizations. Their efforts were coordinated by the coastguard.

"Together with Sea Watch and Sea Eye our crew was able to save more people last night under bad weather conditions," the German NGO Jugend Rettet tweeted on Tuesday, referring to two other nonprofit groups.

It said that "three people died", though it was not clear whether the victims were found dead or died during the rescue.  Italy's coastguard said it was seeing "a lot of activity" on Tuesday, "but not at the same level as on Monday".

Spain's Civil Guard said one of its vessels serving under Frontex's anti-trafficking Operation Triton had rescued 133 people found on an inflatable dinghy off Libya.  Those rescued included 17 minors, two babies and 23 women, seven of whom were pregnant, it said.

Traffickers on the North African coast take advantage of periods of good weather to set large numbers of migrants seeking passage to Europe out to sea, a notoriously dangerous crossing.

On Sunday, over 3,300 people were rescued in 31 separate operations, while two bodies were recovered.  The record for migrants rescued on a single day stands at 7,000, plucked from their unseaworthy vessels on August 29, 2016.

Over 73,300 migrants have landed in Italy since January, a 14 percent increase from the same period last year.  Just over 2,000 people have died attempting the crossing or are missing feared drowned since the beginning of 2017, according to the UN's refugee agency.