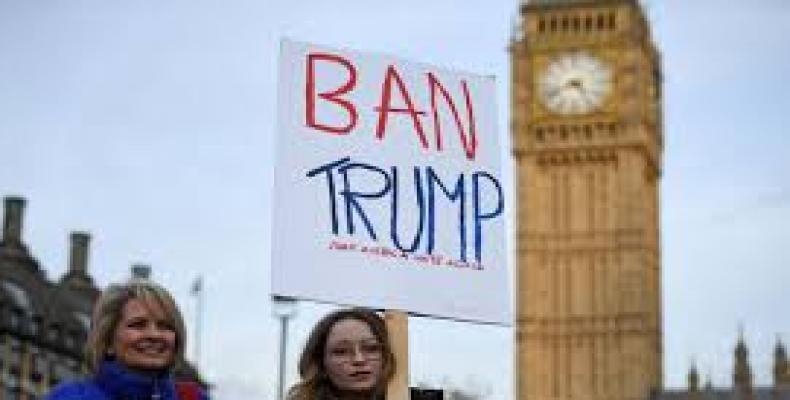 Washington, July 5 (RHC)-- U.S. President Donald Trump has no plans to visit Britain in the near future, although he may still change his mind, according to a senior U.S. government official, rejecting reports that Trump was considering a quick visit to the UK next week.

Quoting UK government sources, British media reported on Monday that Trump could stop by Downing Street at short notice after visiting his golf resort in Scotland in the next two weeks.

Deputy White House press secretary Sarah Huckabee Sanders said Monday that the reports were “not accurate” and there were no plans for Trump to visit British Prime Minister Theresa May this month.

Downing Street also rejected the reports.  James Slack, a spokesman for May, said: “I am not aware of any plans for the president to visit the UK in the next few weeks.”

May traveled to Washington in January to meet with Trump soon after his inauguration and extended an invitation from Queen Elizabeth II for a state visit this year but the trip has been postponed over concerns about the threat of protests.

Trump is deeply unpopular in Britain, and he would probably face wide-scale protests during a visit to the country.  Recent surveys have found that more than half of people in the UK believe Trump is a threat to global stability.

The president has even avoided trips to his home in New York City, in part because of the potential for disruptions, as his poll numbers in the United States hit historic lows.

Many activists in the UK, including some members of Parliament and trade unions, have vowed to hold the largest demonstrations in British history during any state visit by the U.S. leader.

Last month, two administration officials said Trump was considering postponing or scrapping a visit to Britain this year amid intense backlash over comments he made about London Mayor Sadiq Khan after the recent terrorist attack in London.

“At least 7 dead and 48 wounded in terror attack and Mayor of London says there is ‘no reason to be alarmed!’” Trump wrote on Twitter on June 4.

The London mayor was not playing down the threat posed by terrorists and was in fact referring to the public’s reaction in seeing heavily armed security forces deployed in the city, a spokesman for Khan said after Trump’s tweet.

Khan had “more important things to do than respond to Donald Trump’s ill-informed tweet that deliberately takes out of context his remarks urging Londoners not to be alarmed when they saw more police — including armed officers — on the streets,” the spokesman said.