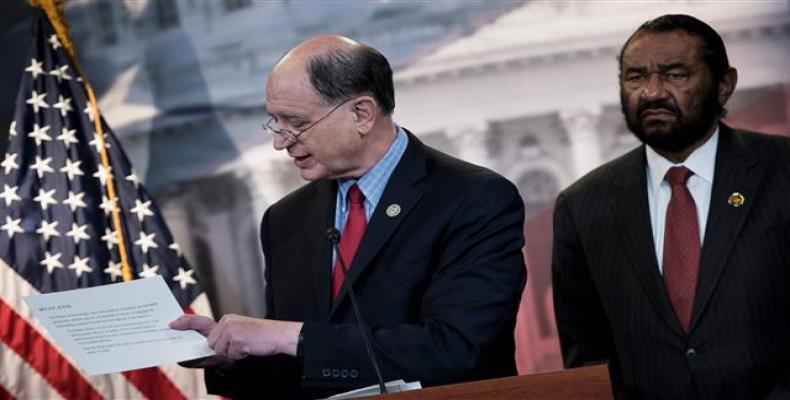 Washington, July 13 (RHC)-- Democratic Congressman Brad Sherman has formally introduced an article of impeachment against President Donald Trump, accusing the president of obstructing justice during a federal investigation of Russia’s role in 2016 election.

The California representative has announced that he and another congressman, Houston Democrat Al Green, signed their names to a resolution to impeach “America’s amateur president,” arguing that Trump’s abrupt firing of James Comey as FBI director in May amounts to obstructing justice and “high crimes and misdemeanors.”

"Recent disclosures by Donald Trump Jr. indicate that Trump's campaign was eager to receive assistance from Russia.  It now seems likely that the President had something to hide when he tried to curtail the investigation of National Security Advisor Michael Flynn and the wider Russian probe.  I believe his conversations with, and subsequent firing of, FBI Director James Comey constitute Obstruction of Justice," Sherman said in the statement.

Sherman noted that Trump demonstrates "ignorance accompanied by a refusal to learn," adding: "We're no longer surprised by any action, no matter how far below the dignity of the office -- and no matter how dangerous to the country."

"I am introducing Articles of Impeachment to begin a long process to protect our country from abuse of power, obstruction of justice, and impulsive, ignorant incompetence," Sherman said, admitting that the move is "the first step on a very long road."

Green, the other democrat who signed the article, said in an interview that "I don't see this as a long shot or a sure shot... I see this as the right thing to do.  I've always felt that if I'm doing the right thing, my conscience is clear, and I think history will vindicate me regardless of how the House votes."

He added that it was Comey's firing, as well as Trump's threatening admonitions to Comey on Twitter, that form the basis of the impeachment case.  "When you combine those things, you have an impeachable act, and for that the president has to answer to Congress."

The impeachment bid comes as the Senate Judiciary Committee held hearings on Christopher Wary to replace Comey as FBI director, about after reports surfaced that the president's son, Donald Trump Jr., met with a Russian lawyer during the campaign in the belief that she had damaging information about White House rival Hillary Clinton.

The U.S. Constitution says a president can be impeached for committing "high crimes and misdemeanors," but a majority vote in the House, currently controlled by Republicans, is required to impeach a president.  Fifty percent of the House of Representatives and two-thirds of the Senate must agree to remove a president from office.