U.S. Vice President Says His Boss is &quot;Just Getting Started&quot; 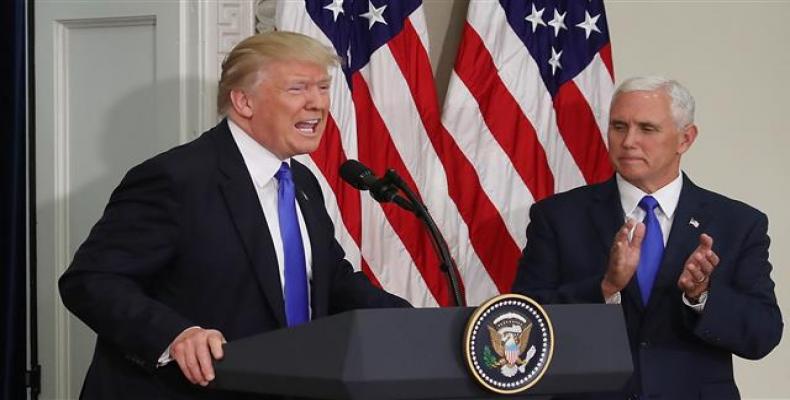 Washington, July 25 (RHC)-- U.S. President Donald Trump has scored major victories at a “historic pace” since entering the White House, says U.S. Vice President Mike Pence, boldly claiming that the new Republican head of state is “just getting started.”  Pence wrote in an article that was published by Fox News that the president "has taken bold action to restore prosperity, keep Americans safe and secure, and hold government accountable."

The vice president said Trump had signed “more than 40 bills and nearly 40 executive orders” to deliver on his campaign promises about economy, homeland security, the military and the fight against terrorism.  And he wrote: “I say with confidence: We will make America safe again.  We will make America prosperous again.  And to borrow a phrase, we will Make America Great Again.”

Pence hailed Trump’s decision to approve controversial pipeline and fossil fuel projects.  He also said withdrawing the U.S. from the Paris climate accord proved that the president was “putting America First.”

Dramatically increasing the military spending while staging a crackdown on immigration through “decisive steps” such as the Muslim ban were some of Trump’s achievements in boosting homeland security, Pence noted.  He also praised Trump for supporting congressional efforts to “reform” the American healthcare.  This is while the President and his party have failed to unite against a Democratic Party that has successfully blocked some of Trump’s key policies despite being in the minority.