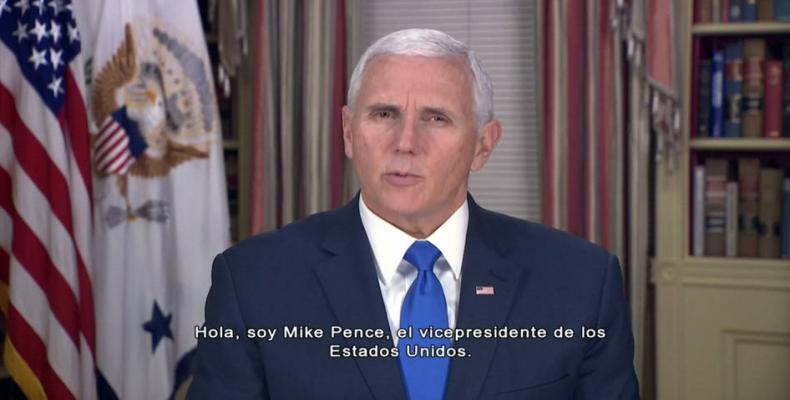 Caracas, January 23 (RHC)-- The United States is continuing to ratchet up pressure on Venezuela in what appears to be part of a coordinated effort to remove constitutionally-elected Venezuelan President Nicolás Maduro from office.  On Tuesday, Vice President Mike Pence posted a video message on-line, telling Venezuelan opposition leaders and protesters that the U.S. fully supports their efforts to overthrow Maduro.

Vice President Mike Pence said: “Hola.  I’m Mike Pence, the vice president of the United States.  And on behalf of President Donald Trump and all the American people, let me express the unwavering support of the United States as you, the people of Venezuela, raise your voices in a call for freedom.  Nicolás Maduro is a dictator with no legitimate claim to power.”

Venezuelan President Maduro responded by saying he would revise diplomatic relations with the United States, affirming: “Never before has a high-level official said that the opposition should overthrow the government.”

Venezuelan Vice President Delcy Rodríguez also responded to the video.  “Because Mr. Pence doesn’t have a job, now he wants to come and run Venezuela, handing out instructions on what should happen in Venezuela tomorrow, openly calling for a coup d’état in Venezuela. I will say it like the Venezuelan people would say it to you: 'Yankee, go home.'”