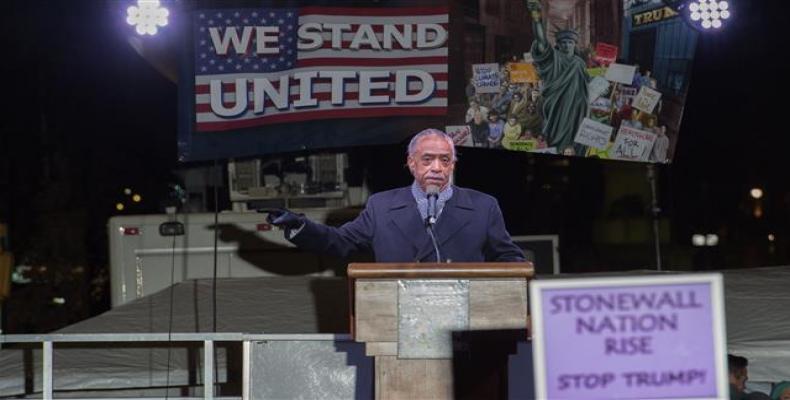 Reacting to Trump’s Friday speech to Long Island police officers, Sharpton on Saturday further condemned the president’s use of an anti-Irish slur, insisting that he is not anti-law enforcement and believes that police should be held accountable for their actions as well.

"As if the reprehensible statement by President Donald Trump encouraging police violence wasn't enough, he used a slur against Irish regarding "Paddy Wagons,” wrote the well-known civil rights advocate in an Instagram post.

During his Friday address on gang violence, Trump said: "When you see these thugs being thrown into the back of a paddywagon, you just see them thrown in, rough, I said, ‘Please don't be too nice."

Sharpton’s on-line message included a video clip of him speaking to members of his organization, the National Action Network, which defends civil rights.  In the video, Sharpton underlined that he is not anti-law enforcement or trying to protect gangs by speaking out against Trump, noting: "We are not adverse at all to stopping criminal behavior that preys on our community first and foremost."

"The problem in our community is those who we trust to fight crime, they must be held accountable if they go over the line and commit a crime," added the civil rights leader.  This is while New York’s Suffolk Country Police Department (SCPD) which operates on Long Island, also reacted critically to Trump’s remarks insisting that they do not tolerate “roughing up of prisoners.”

“The SCPD has strict rules & procedures relating to the handling of prisoners. Violations of those rules are treated extremely seriously,” the department tweeted Friday.  “As a department, we do not and will not tolerate roughing up of prisoners.”