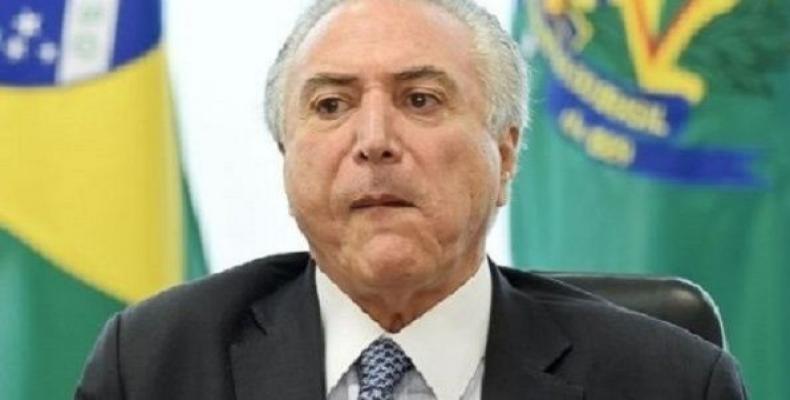 Brasilia, August 3 (RHC-teleSUR)-- Unelected Brazilian President Michel Temer, who is the country's most unpopular president since 1985 when democracy returned, has vowed to continue on with his controversial economic and political reforms now that he is safe from a trial to face corruption charges.

“With the support the lower house has given me, we will pass all the reforms that the country needs.  Now it is time to invest in our country. Brazil is ready to start growing again,” the de facto president said in a statement following the decision of Congress to clear him of corruption charges by a 263-227 vote.

He announced that he will “carry out the actions needed to complete the work that this government began,” until the end of his unelected term, which goes until December 31st, 2018.  One of the leading candidates for 2018's elections, former president and Workers Party leader Luiz Inácio Lula da Silva was recently sentenced to over nine years in prison on alleged passive corruption charges.

Temer's presidency has been marked by a harsh agenda of austerity, notably pushing through massive reforms to Brazil's labor legislation in a move that was met with resistance from workers and unions across the country. His next challenge will be to push forward with pension reform, which will require a three-fifths majority in the House and Senate since it is a constitutional reform.

Saying that the decision has served to strengthen a deeply unpopular president, a leader of the Party of the Democratic Movement of Brazil (PMDB), Darcisio Perondi, told AFP that "Temer will resume talks on reforming pensions next week ... and will stimulate fiscal reform."

Temer's popularity sits at a dismal five percent, which is the lowest of any president since the return of democracy in 1985, according to a recent poll by Ibope. Eighty-one percent of Brazilians also supported the trial of the president for corruption, according to the same polling group.