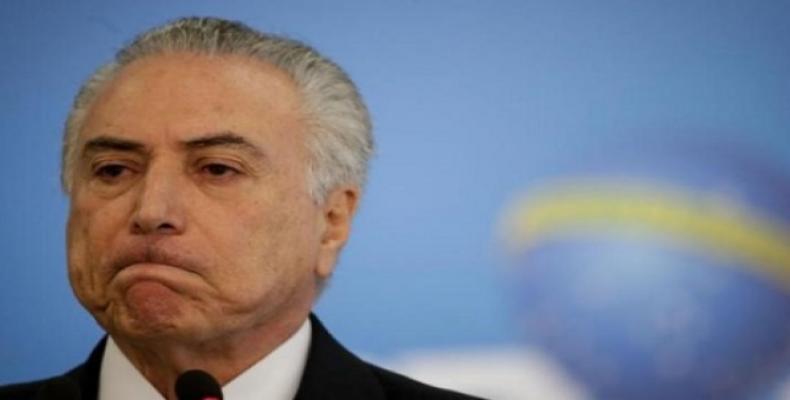 Brasilia, October 2 (RHC)-- Brazilian President Michel Temer’s popularity has plummeted down to just three percent, according to a new poll.  The president, embroiled in a number of corruption charges, is the most unpopular Brazilian leader since the country’s dictatorship, which lasted from 1964 to 1985.

The results from the Brazilian Institute of Public Opinion and Statistics poll are based on surveys with some 2,000 residents in 126 Brazilian cities, taken during the last week of September.  The poll found that those who see Temer's management as "bad" or "very bad" has jumped to 77 percent from 70 percent in July.  The survey also found that no female respondent had rated his administration as "very good."

In the latest charges, Temer is accused of paying bribes to keep a jailed politician from testifying.  He is also accused of leading a group in Congress that took millions of dollars in bribes from companies seeking state contracts.  Temer defeated the first charge of bribery but may face trial for his involvement in the "Gang of the Lower House."

Since he was appointed president, Temer has pushed through a series of neo-liberal reforms, which have been widely condemned by women's groups, Indigenous organizations, labor unions and environmental activists.