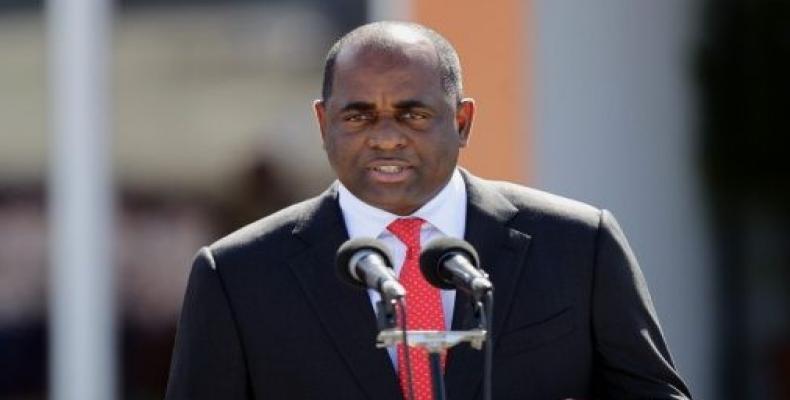 Prime Minister Skerrit told TeleSUR that he had finished travelling through the country to see the extent of the damage, and that it seems likely there will be at least 40 deaths.  This number has yet to be officially confirmed, as damage and casualties are still being assessed.

Dominica has called a state of emergency, imposed a curfew, and is calling for the international communities' help.  Food, water, medical supplies, household items and communications equipment are needed immediately.

The nation's Principal Advisor Hartley Henry wrote on his Facebook page: “The country is in a daze — no electricity, no running water — as a result of uprooted pipes in most communities.  The island has been devastated.”

A CNN crew flew over the island, reporting that even the island's once lush rainforests had all but disappeared, leveled under the force of the wind.

Henry said communication remains a major problem and people "who walked 10 and 15 miles towards the city of Roseau from various outer districts report total destruction of homes, some roadways, and crops."

A “state of emergency has been declared in Dominica.  Curfew will be enforced. Curfew hours will be decided,” said Dr. Didacus Jules, the Director General of the Organization of the Eastern Caribbean States, OECS.

In a later statement, Henry said the Prime Minister Roosevelt Skerrit has continued to survey the damage across Dominica.

“It is clear that we have a tremendous challenge on our hands, in the Caribbean region as a whole,” said Dr. Keith Mitchell, Grenada’s Prime Minister and Chairman of CARICOM, in response to the island’s call to action, adding an offer of solidarity from his nation.

“We, in Grenada must recognize that we have a tremendous responsibility to help out our brothers and sisters in Dominica and all other affected countries. This is about us, the region.”

Antigua and St. Lucia have volunteered their services as staging posts for the aid deliveries.

Two Venezuelan helicopters are on standby to ferry supplies from Hewanorra International Airport in St. Lucia to Canefield Airport, the smaller of Dominica’s two airports and apparently the only one currently able to receive helicopter landings safely.

"The port in Roseau, Dominica’s capital city, is scheduled to open on September 20th, allowing ships to bring relief as soon as it is no longer dangerous to travel by sea," Henry said.

The force of the Category 5 storm, with maximum sustained winds of 257 kilometers per hour ripped the roofs off buildings on the island of 72,000 people.

Ronald Jackson, ‎executive director, the CDEMA said an estimated 70 to 80 percent of buildings have been damaged, along with hospitals, roads, and bridges.