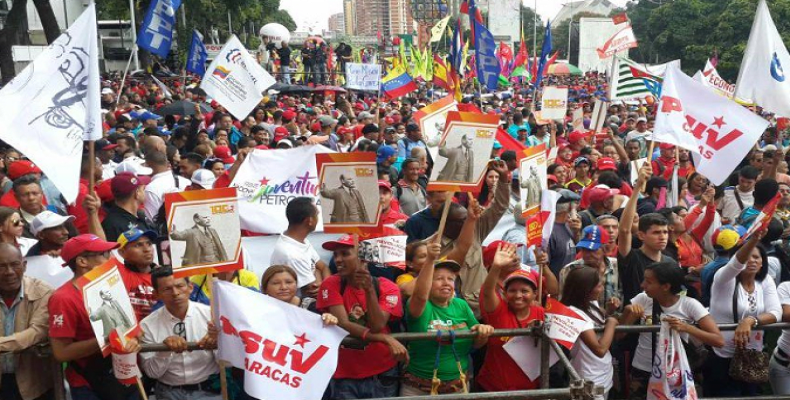 Caracas, November 8 (RHC)-- Thousands across Latin America celebrated the centennial anniversary of the Russian Revolution with various events throughout the region.

In Venezuela, workers marched on Tuesday from Caracas' Autonomous National Telephone Company to the Miraflores Presidential Palace.  "We, as revolutionaries and socialists, join in this global commemoration,” said Freddy Bernal, a member of the National Directorate of the United Socialist Party of Venezuela, who called for the mobilization.

In Peru, the Communist Party hosted an event at the Auditorium of the Telephone Workers' Union of Peru to celebrate the Russian Revolution.  A series of events are were also held in Uruguay.

Meanwhile in Bolivia, President Evo Morales congratulated the Russian people on the 100th anniversary of their revolution, describing it as an example in the fight against tyranny and inequality.  "The Russian Revolution triumphed on this day, one hundred years ago. United, peasants and workers managed to form the first socialist state in the world," Evo Morales posted on his Twitter account.

The Bolivian government is slated to host an international meeting titled "A 100 years of the Russian Revolution," in which its influence on revolutionary and progressive movements in Latin America will be analyzed.  Bolivia's Vice-President Alvaro Garcia Linera is also scheduled to give a keynote address at the Central Bank auditorium in La Paz on the occasion.

Other events are taking place until Thursday in Peru, Chile, Brazil and elsewhere in Latin America.

Russia's October Socialist Revolution took place on October 25, 1917, according to the Julian calendar, or on November 7, according to the Gregorian.  It was the second phase of the 1917 Revolution, which was preceded by a mass women's protest as they took to Nevsky Prospekt, the main avenue of the former Russian capital of Petrograd.