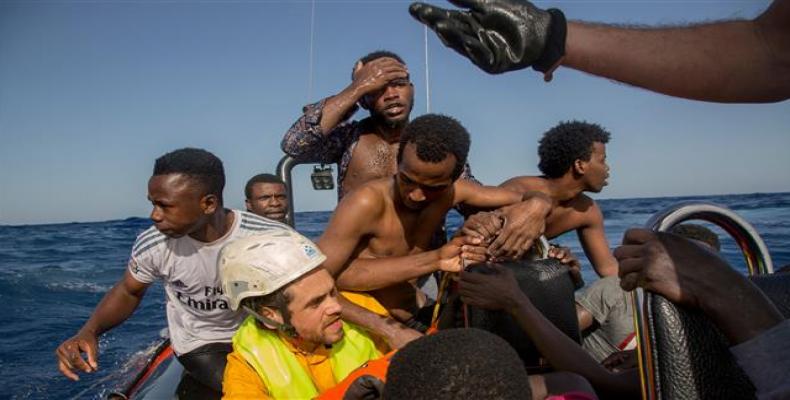 Brussels, November 16 (RHC)-- The European Union member states have vowed to take in 34,000 refugees directly from North Africa and the Middle East, a day after the United Nations condemned as “inhuman” the EU’s policy of helping Libyan authorities intercept Europe-bound refugees.

Sixteen countries have so far offered to admit refugees to meet the European Commission's goal unveiled in September of taking in at least 50,000 refugees over the next two years under the bloc's resettlement program, which is aimed at discouraging refugee boats from making the risky Mediterranean crossing.

EU migration commissioner Dimitris Avramopoulos said: "We are exiting crisis mode gradually and we are now managing migration in a spirit of partnership and shared responsibility, inside and outside the EU."

Avramopoulos also warned of further legal action against three of the EU's eastern countries if they continue to refuse to take in refugees who managed to reach Greece and Italy under the quota system.  "I hope that Poland, Hungary and the Czech Republic will take this opportunity to, let's say, revise their position and start relocating refugees," he said.  "If nothing should change, as you know the commission has the power to take things one step further."

Europe has launched a string of schemes as it has been hit by an unprecedented influx of refugees who are fleeing conflict-ridden zones in North Africa and the Middle East, particularly Syria. Many blame major European powers for the unprecedented exodus, saying their policies have led to a surge in terrorism and war in conflict-ridden regions, forcing more people to flee their homes.

UN High Commissioner for Human Rights Zeid Ra’ad al-Hussein said in a Tuesday statement: “The suffering of migrants detained in Libya is an outrage to the conscience of humanity.”