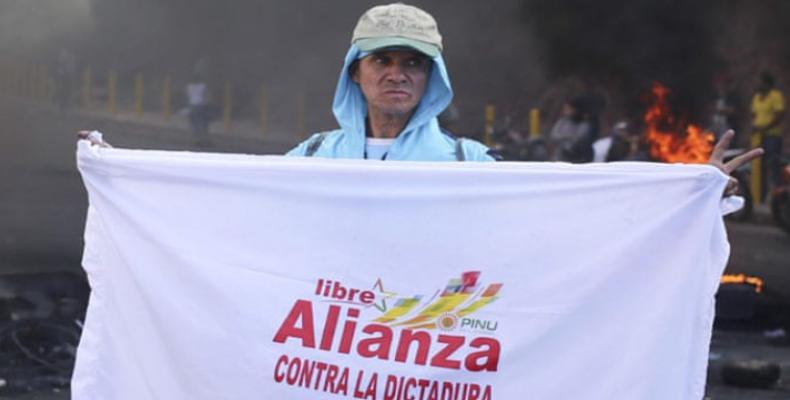 Tegucigalpa, December 2 (RHC) -- The Honduran government declared a 10-day curfew and empowered police and military to crack down on unrest that has erupted over the five-day delay in official election results being released.

The curfew, which began at 11:00pm local time on Friday, suspends the right to free movement from 6:00pm to 6:00am and directs security forces to detain anyone violating the curfew or who is "in some way suspected of causing damage to people or their property".

The executive decree, read on national radio and television by Jorge Ramon Hernandez,  Chief of Staff of the government, also orders the military to support the police in maintaining order, including removing road blockades and other occupations that protesters have set up throughout the capital city and across the country to pressure electoral authorities to release honest results in an increasingly contested presidential election.

President Juan Orlando Hernandez, who is seeking re-election, said the curfew was imposed to "safeguard security" after heated protests spilled over into looting on Friday.

Hernandez' opponent, Opposition Alliance candidate Salvador Nasralla, claimed that looting was the result of infiltrators and "government operations" designed to sew panic and chaos and justify a military crackdown and curfew.

He also suggested the Supreme Electoral Tribunal (TSE) will use the shield of the curfew to announce Hernandez as president-elect with limitations on peoples' ability to protests the results.

Amid the unrest in recent days, riot police have fired tear gas to disperse protesters and military police have reportedly shot live bullets at protesters.

Unrest has escalated since Wednesday night, when thousands of people took to the streets after Hernandez eclipsed Nasralla in the TSE partial official results following an hours-long silence due to technical problems.

The shift in the results contradicted what TSE magistrate Ramiro Lobo on Monday had called an "irreversible" trend towards Nasralla's victory. On Thursday, Lobo raised concerns about the TSE's technical issues and called for the situation to be investigated.

The TSE's slow delivery of results from Sunday's election and a sudden change in the direction of results in favour of Hernandez after the first report of results - which showed a 5 percent lead for Nasralla with over half of ballots counted - has stirred suspicions of manipulations and fraud.

Opposition supporters also accuse TSE President David Matamoros of selectively processing votes to favour Hernandez and his National Party. Matamoros is an active member of the National Party and previously served as the party's general secretary and as a member of Congress.