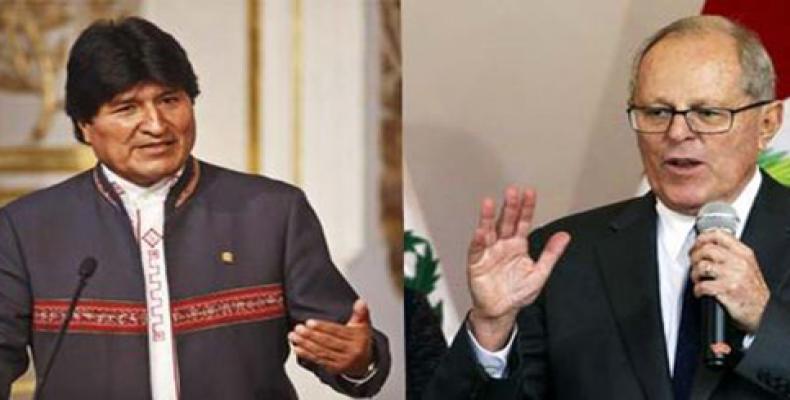 La Paz, March 15 (RHC)-- Bolivian President Evo Morales has written to his Peruvian counterpart Pedro Pablo Kuczynski, asking him to "recognize the right of … Venezuela to participate in the VIII Summit of the Americas."

Morales also reminded Kuczynski that on July 20th of last year, over 30 American heads of state – including Venezuelan President Nicolas Maduro – all agreed to participate in the summit, due to be held in Lima April 13-14.

çThe Bolivian head of state said that being host to the gathering requires the Peruvian president to "organize the meeting and provide meeting logistics." It does not, Morales wrote, "under any conditions, allow (you) to decide who the members are and who gets to participate."

Last month, Kuczynski rescinded Maduro's invitation to the summit, saying the Venezuelan administration's decision to hold presidential elections in May was "undemocratic."

In his letter, Morales said that by uninviting Maduro, Kuczynski "is going against the fundamental legal and political norms that maintain the Summit of the Americas, based on equality and respect among the members States…

"To act otherwise will create a bad precedent that will normalize conduct that is arbitrary, intolerant and unilateral," the Bolivian leader insisted.

On Tuesday,  President Morales criticized the Lima Group, of which Bolivia is not a member, for convincing Kuczynski to formally uninvite the Venezuelan head of state.

Morales said Maduro's "anti-imperialist and anti-capitalist" position has caused the United States and its junior partners to veto his presence at the summit.