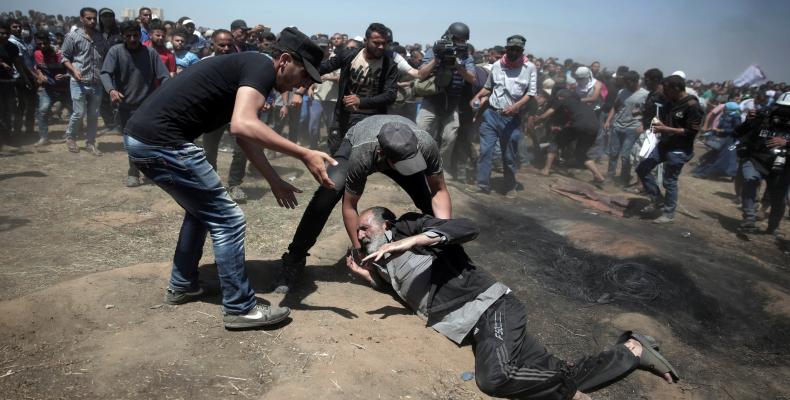 Gaza City, May 15 (RHC)-- The Israeli military killed at least 61 Palestinians in Gaza and wounded 2,700 more for protesting Monday’s opening of the U.S. Embassy in Jerusalem and the Israeli occupation.

Among the victims shot dead by an Israeli sniper was 30-year-old Fadi Abu Salmi, who used a wheelchair and had both his legs amputated. Another victim was 8-month-old Laila al-Ghandour, who died early this morning after inhaling tear gas fired by the Israeli military, including being dropped by drones.

Palestinian leaders are accusing the Israeli military of carrying out war crimes during Monday’s crackdown.  Palestinian chief negotiator Saeb Erekat said: “We witnessed the killing and slaughter of dozens of our people in the Gaza Strip at the hands of the Israeli army, an act that’s tantamount to a war crime, which we condemn in the strongest possible terms, and urge the international community to move to provide international protection for our people.  At the same time, we witnessed the move of the American Embassy to Jerusalem, which is an act that’s tantamount to putting the cornerstone of a new settlement outpost in the occupied Palestinian land.  Moving the embassy, now we have a new settlement outpost called 'American Embassy.'”

Palestinians across the West Bank and Gaza have launched a general strike to protest the killings.  Tuesday's general strike comes on the 70th anniversary of the Nakba, or the Day of Catastrophe, when more than 700,000 Palestinians were forced to flee or were expelled from their homes.