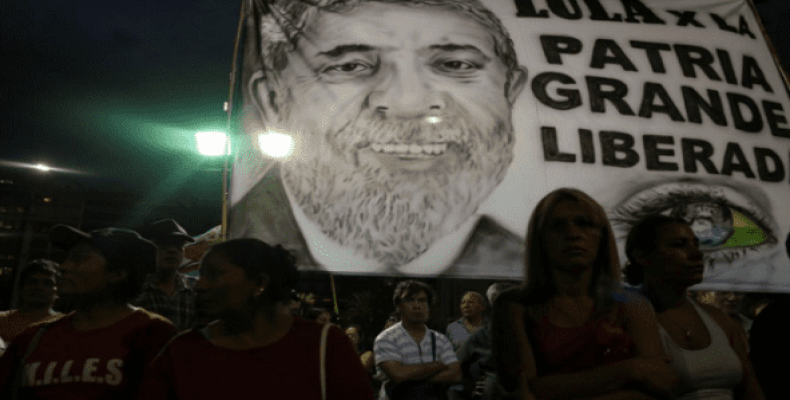 Brasilia, May 19 (RHC)-- In Brazil, Workers' Party president Gleisi Hoffmann and former mayor of Sao Paulo, Fernando Haddad, visited former Brazilian President Luiz Inacio Lula da Silva in prison to discuss his presidential campaign and government plans.  The party's president and activists have maintained Lula will be their candidate in October's presidential election despite other parties calling on them to review proposals to switch their support to another candidate.

“Why should we give up on his candidacy?  Now, that doesn't mean to say that we won't discuss proposals with (Left-wing) parties,” Hoffman said, after the visit.  “I believe that after the first round, we will all unite for the second.  Those who comprised the Left-wing bloc in the first round will have to lend their support to the leading candidate in the second round.  I'm sure of this.”

She emphasized that Lula leads every presidential poll and that “even if his (presidential candidate) registration is put in question, he can still be a candidate and proceed... until the day he is sworn in (as president).  He can participate in the electoral process.  Many have competed and have won the election as well.  There are clear examples of this.”

Haddad, speaking to members of the local media after the visit said that Lula “wants a bold government plan" to deal with several of the issues faced by the poor and working class in Brazil.  Following reports in the Brazilian media that he could receive a pardon for the crime he was found guilty of, Lula said: "I won't accept a pardon.  A pardon is for the guilty.  I'm not guilty.  I'm innocent, and I want to prove my innocence.  I want justice in my case.”

Ciro Gomes, the presidential candidate for the Democratic Labor Party (PDT), also dismissed the idea of pardoning.  He stressed that a “pardons are reserved for those who have been condemned” and have exhausted all of their appeals.

His two-terms in office marked by a number of social programs, lifting millions of Brazilians out of poverty and removing the country from the United Nations World Hunger Map. He left office with a record approval rating of 83 percent in 2011, according to Datafolha.