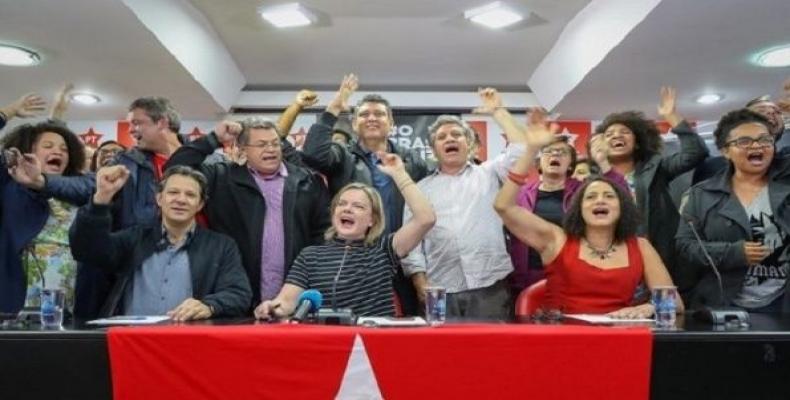 Brasilia, August 8 (RHC)-- In Brazil, following a closed meeting, the presidents of the Workers Party (PT), Senator Gleisi Hoffman, and of the Brazilian Communist Party (PCdoB) lawmaker Luciana Santos announced in a press conference they were entering into a coalition for the upcoming October presidential elections.

Manuela d'Avila, member of the PCdoB and former federal senator, will be the vice-presidential candidate to share the ballot with former President Luiz Inacio Lula da Silva.  Senator Hoffman highlighted the importance of d'Avila for the strength and unity of the left-wing and the progressive forces in Brazil.

"Manuela represents the strength of women, of the youth, represents strength and determination," stated Senator Gleisi Hoffman in the press conference Sunday.  PCdoB has decided to withdraw their own bid for office, where Manuela d'Avila was going to run for the presidency, in order to run together with the PT.

"During this first moment, however, due to the legal situation of Lula's candidacy, the coordinator of the Lula government plan, Fernando Haddad, will be recorded as vice president," reported the official site of the PT's leadership "PT na camara."

"The important thing is that as of this Monday Haddad and Manuela will be together touring Brazil with a strong agenda," stated PT president Senator Gleisi Hoffman.  The ballot will also have the support of Social Order Republican Party (PROS) and the Workers Cause Party (PCO) as a coalition.  This front has the endorsement and support of the governors of the Brazilian Northeast, of Minas Gerais and of the majority of the Brazilian Socialist Party (PSB).

"I am very happy with the unity around this extraordinary figure, the greatest leader of the left-wing President Lula," said Fernando Haddad during the conference.

Former President Lula da Silva is leading in the presidential polls, in spite of being imprisoned for over a hundred days through a very questioned "lawfare" case.  "Even with all the persecution Lula only grows in the polls and it will be a pleasure to cross the country next to Manuela.  Now let's make our programs compatible," Haddad said.

The latest development makes it the fifth time the PT and PCdoB are running together.  PT won Brazil's last four elections, two were won by Luiz Inacio Lula da Silva and then two by Dilma Rousseff, who was impeached through an illegal parliamentary coup in 2016.