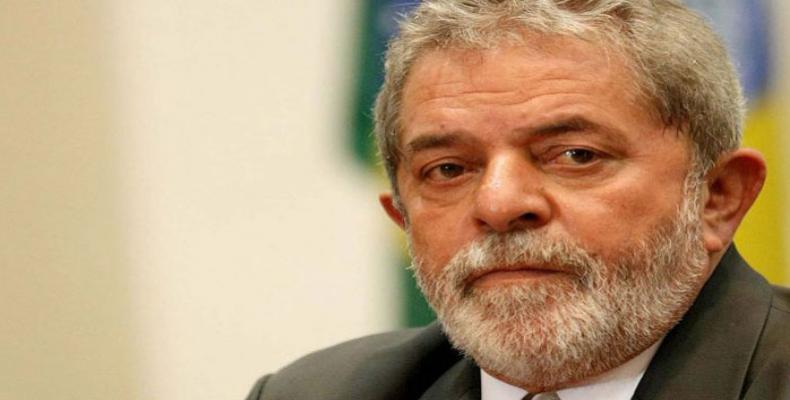 Brasilia, December 7 (RHC)-- Former Brazilian President Lula da Silva has repeatedly suggested he intends to run for president in 2018.  And the Workers' Party in Brazil, until recently the most dominant political force in the country, is counting on "Lula" to bring the left-wing force back to glory, the head of the party confirmed in an interview with the Brazilian newspaper Folha de Sao Paulo.

It is a national demand, not just of the Workers' Party, but of those who see a leader in him,” Workers' Party President Rui Falcao said of the former president.  The Workers' Party, also known by its Portuguese acronym PT, suffered a difficult year in 2016 with major setbacks for its more than decade-long run in office.  After the party had been in power since Lula entered office in 2003, Lula's successor Dilma Rousseff was ousted in widely-condemned parliamentary coup in August.

Praised for his tenure as president from 2003 to 2011, Lula remains a popular figure in Brazi, despite the fact that he, too, is facing corruption allegations.  The former president denies any wrongdoing, affirming that he is a victim of judicial persecution that is driven by political interests looking to sully his name and destroy his potential candidacy for the election in 2018.

Lula stands a good chance at winning the presidency in 2018.  Despite the myriad of problems plaguing the PT in recent months, the party is still the most popular.  Local polls in recent months have also positioned Lula as the front-runner ahead of former ally-turned-rival Marina Silva of the Green Party, who failed to secure a spot in the runoff against Rousseff in 2010, and ahead of conservative opposition figures.

The PT and Lula's lasting popularity is partially due to the fact that other parties are also mired in scandal.  Unelected President Michel Temer and his PMDB party are widely seen as usurpers and his push to institutionalize austerity for 20 years has driven his approval ratings into the ground.

But Temer's unpopularity isn't the only thing stopping him from being a contender in 2018.  The right-wing politician is also banned from running for office for eight years over charges of electoral fraud — a fact that didn't stop him from being installed as president with Rousseff's ouster.

Lula, however, must survive a series of increasingly discredited and politically motivated accusations against him and a media campaign that he and his supporters argue is aimed at destroying his image.  Social movements have rallied around Lula in response, launching a campaign last month to defend his legacy and potential candidacy.

The PT's Falcao told Folha de Sao Paulo that the party is effectively putting all its eggs in one basket.  “There is no (plan B). We only work on plan A," he said. "Those who think of a plan B reject plan A.”