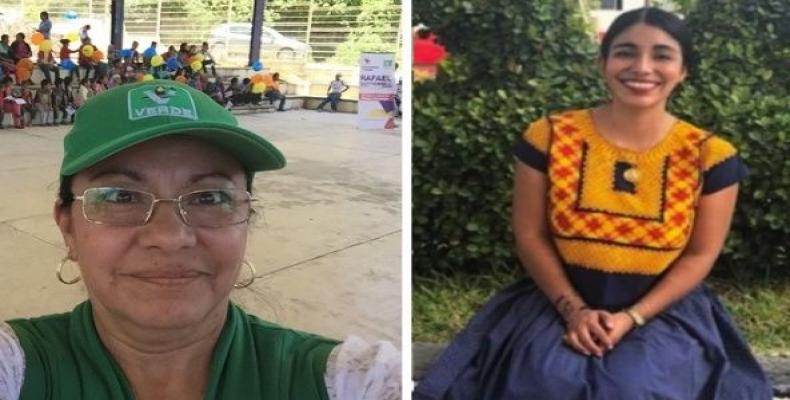 Mexico City, June 5 (RHC)-- Police in Mexico are investigating the deaths of two more political candidates after their bodies and those of their companions were found.  Running for a position in Juchitan's council and as an Institutional Revolutionary Party (PRI) member, Pamela Teran Pineda, together with her driver and photographer, was shot dead on Saturday after leaving a restaurant in Colonia Centro.

The bodies of legislative candidate for Puebla Juana (Juany) Irais Maldonado, representing the Green Party Ecologists of Mexico (PVEM), and City Public Health, Environment and Education Councillor Erika Cazares were also found Saturday morning after the pair had completed a campaign visit to Jopala.  Police reported that Maldonado and Cazares' vehicle was found abandoned on the side of the road with all their effects in place, ruling out robbery as a motive.

Teran's death, however, may have been gang-related: her father, Juan Teran, has a criminal record and alleged relations with the Juchitan Cartel, police said.  "It is urgent that the authorities take action on the matter to put an end to the violence and aggression faced by candidates and candidates for public office, within the framework of the current electoral process," the PVEM said in a statement.

PRI Party President Jose Antonio Meade offered his condolences to the grieving families on his Twitter account: "I will put an end to gender violence and political violence. I'll put justice and the law over the amnesty of criminals."

At least 110 electoral candidates have been murdered since September. A letter from the UN Office for Project Services (UNOPS) denounced crime and state corruption.