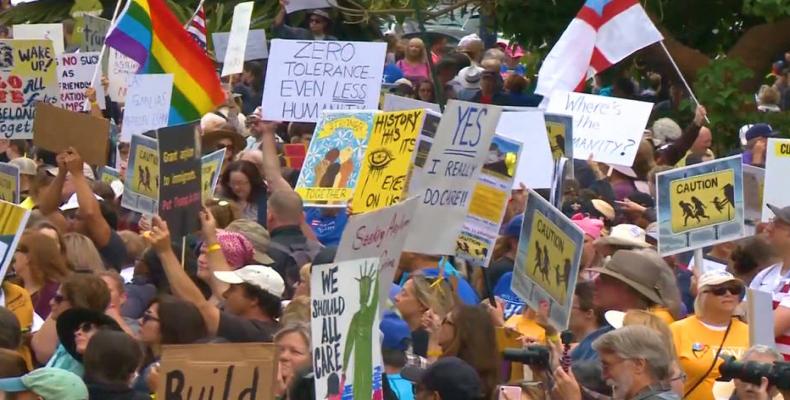 San Diego, June 25 (RHC)--Protesters continue to rally in cities across the United States to demand the administration of President Donald Trump reunite undocumented families who have been separated by U.S. border agents at its border with Mexico.

The demonstrations held over the weekend were focused in states that border Mexico, including Texas, Arizona, and California.  Protests were also held in the state of Florida, which shares a water boundary with Mexico.

A coalition of immigrant rights groups called for rallies against family separations outside the White House and the U.S. Department of Justice and Homeland Security.

The Donald Trump administration announced plans in April to prosecute all immigrants caught along the southwest border with illegally entering the country.  Parents were jailed and children taken to government-contracted shelters.

More than 2,300 children were taken from their families in recent weeks under a Trump administration "zero tolerance" policy in which people entering the U.S. illegally face being prosecuted.

Parents and children were being detained separately.  But after public outcry, Trump last week ordered that they be brought back together.  Now, the administration says it will continue with prosecutions and seek to detain families together during their immigration proceedings.

About 9,000 such family units have been caught in each of the last three months, according to U.S. border authorities.  The U.S. government said Saturday it still had 2,053 children in its custody who were separated from their parents.

The Department of Homeland Security claims it has what it calls "a well coordinated" process in place in the face of criticism from lawyers for parents and children who have said they have seen little evidence of an organized system.