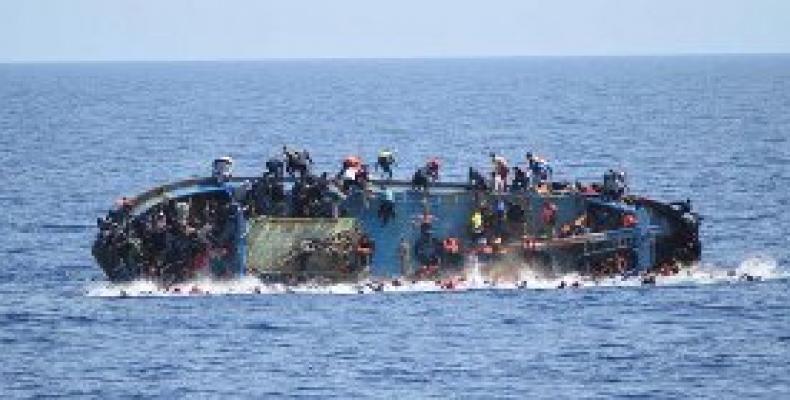 Geneva, July 4 (RHC)-- The United Nations refugee agency says a total of more than 1,000 refugees have drowned in the Mediterranean Sea so far this year.  The International Organization for Migration (IOM) reported that around 204 people had died in the past few days after being packed into unsafe vessels by smugglers.

A small rubber boat jam-packed with refugees had capsized off the east of the Libyan capital Tripoli on Sunday and an estimated 41 people were rescued, the IOM said.  Three babies were among 103 refugees who drowned in a shipwreck over the weekend.

“There is an alarming increase in deaths at sea off Libya’s coast,” IOM’s Libya Chief of Mission Othman Belbeisi said in a statement, adding: “Smugglers are exploiting the desperation of migrants to leave before there are further crackdowns on Mediterranean crossings by Europe.”

IOM chief William Lacy Swing said he would go to Tripoli this week to see the conditions firsthand. “IOM is determined to ensure that the human rights of all migrants are respected as together we all make efforts to stop the people smuggling trade, which is so exploitative of migrants.”

IOM spokesman Leonard Doyle said the surge in attempts to cross the Mediterranean in recent days may be due to factors such as weather and the end of the holy fasting Muslim month of Ramadan.  “But also there is a recognition I think worldwide that the European Union is starting to manage the process better so maybe they equally are trying to profit while they can. Smugglers will always put profit before safety.”

Despite the increase in deaths in recent days, the number lost at sea so far this year is less than half that recorded by this time last year.  The flow of refugees has abated since a peak in 2015, with the number attempting the dangerous sea crossing from North Africa falling to tens of thousands from hundreds of thousands.

Libya remains a major gateway for refugees and asylum seekers attempting to reach Europe via the Mediterranean Sea.  The other main route, from Turkey to Greece, used by more than a million people in 2015, was largely shut two years ago.  But the journey by land through the Sahara and then across the Mediterranean remains the world’s deadliest refugee route.

Europe has been facing an unprecedented influx of refugees, most of whom are fleeing conflict zones in North Africa and the Middle East, particularly Syria.  Many blame major European powers for the exodus, saying their policies have led to a surge in terrorism and conflicts in the Middle East.

European Union leaders have claimed success in overcoming major differences over how to control the arrival of refugees.  After nine hours of talks in Brussels, EU leaders reached consensus on sharing out refugees arriving in the bloc on a voluntary basis and establishing “controlled centers” within the EU to process asylum applications. The agreement, however, faced criticism as hard to implement and a potential threat to human rights.

They agreed to share responsibility for refugees rescued at sea and to look into setting up sites around the Mediterranean, both inside and outside the EU, to handle asylum claims and send back those whose requests fail. EU officials insist such places would not amount to “camps.”