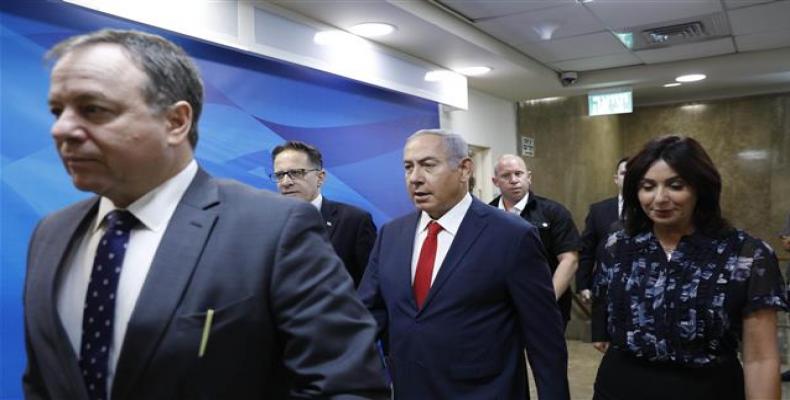 Jerusalem, July 11 (RHC)-- Israeli Prime Minister Benjamin Netanyahu has been questioned again by police as part of their investigations into a string of corruption allegations, media reports say.  Police interrogated Netanyahu in the prime minister's official residence in Jerusalem on Tuesday.  A Reuters cameraman saw a police car pulling into the driveway.

The questioning regards a corruption case involving Israel's largest telecom firm.  Netanyahu's two confidants have been detained on suspicion of promoting regulation worth hundreds of millions of dollars to Bezeq Telecom company.  One accomplice of the Israeli prime minister has reportedly reached a deal to incriminate Netanyhu in a corruption case in exchange for a lighter prison term.

Authorities allege that Netanyahu awarded regulatory favors to Bezeq Telecom in return for favorable coverage of him and his wife on a news site owned by the company.  Netanyahu held the communications portfolio until last year.

In two other cases, in which police already recommended in February that Netanyahu be charged with bribery, the final decision regarding whether to prosecute the premier rests with the Israeli attorney general.

Netanyahu's wife, Sara, is also in hot water after being charged with fraud and breach of trust last month over alleged misuse of funds, including allegedly spending nearly $100,000 in official funds for take-out meals supplied by gourmet restaurants to the prime minister's residence.

So far, partners in Netanyahu’s governing coalition have stood by him, saying they are awaiting the attorney general’s next moves.  However, political pressure could mount on Netanyahu to step down if he is charged.  Netanyahu has repeatedly denied any wrongdoing, dismissing the accusations as a media witch hunt.