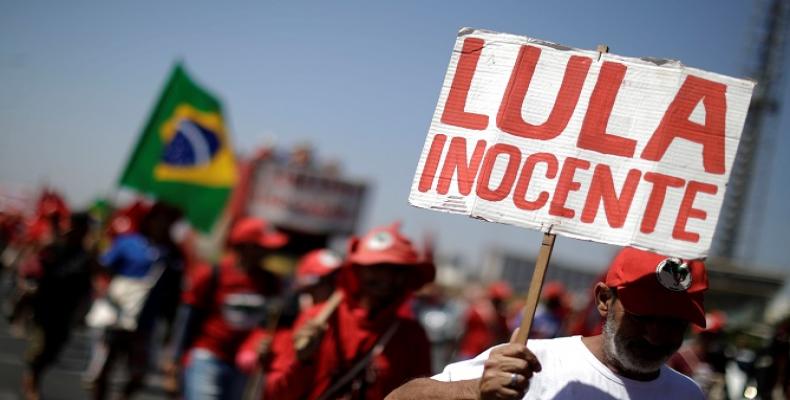 Brasilia, August 16 (RHC)-- Thousands of Brazilians marched on Wednesday to the Superior Electoral Tribunal (TSE) to support the registration of former President Luiz Inacio Lula da Silva on behalf of the Workers’ Party.  Among those marching were the former education minister and mayor of Sao Paulo, Fernando Haddad, who is Lula’s vice presidential running mate.

The march was a continuation of the Free Lula March, headed by the Landless Workers’ Movement (MST) and other social organizations and movements, to demand Lula’s freedom.  Gleisi Hoffman, national president of the Workers’ Party, said in a public statement “many thought that we wouldn’t make it, but together with the people, we registered the candidacy of the former president for a third term… Lula will be on the ballot on October 7, just like the majority of Brazilians want.”

Lula is leading all presidential polls with a third of voters’ intent, double that of any other candidate, despite being sentenced to 12 years and a month in prison over alleged corruption charges.  Many legal experts, both national and international, attribute his detention to insidious corporate media and lawfare.  Even Pope Francis has weighed in on the matter, sending spiritual support messages to the former head of state for his accomplishments.

Lula and his supporters have argued that his imprisonment is a politically motivated attempt to keep him from running in the upcoming elections.

According to legal experts, his candidacy will most likely be invalidated due to a law that excludes people have been convicted after a losing a second appeal. Reports suggest that Haddad would replace Lula if his candidacy is invalidated, though the PT has yet to confirm such scenario

The TSE has until September 17 to determine the future of Lula’s candidacy, with sources close to PT saying that they didn't expect a ruling for at least few days.