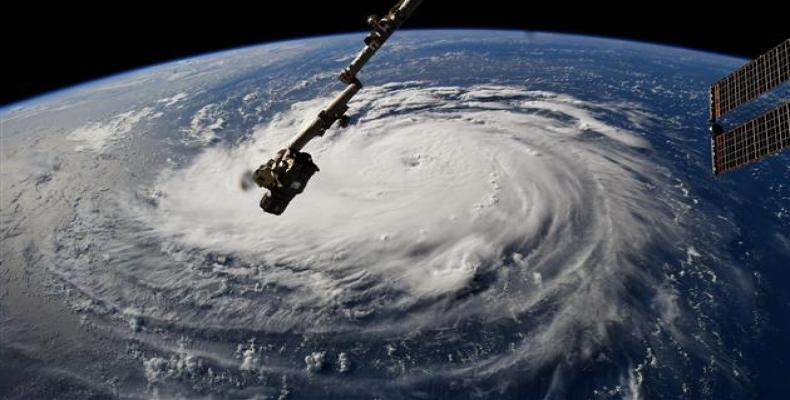 Wilmington, September 12 (RHC)-- The US  National Weather Service is describing the massive category 4 Hurricane Florence currently barreling toward the coast of the Carolinas as "the storm of a lifetime.”

As the hurricane bears down on the U.S. East Coast, North Carolina Governor Roy Cooper said: “This storm is a monster.  It’s big and it’s vicious.  It is an extremely dangerous, life-threatening, historic hurricane."  The governor ordered a mandatory state evacuation for North Carolina's barrier islands.

More than 1.5 million people have been ordered to evacuate North Carolina, South Carolina and Virginia as Hurricane Florence approaches.  Yet, prison officials say they will not evacuate nearly 1,000 prisoners at the Ridgeland Correctional Institution in Jasper County, South Carolina.

In Virginia, Hurricane Florence is bearing down on the site of the construction of a controversial gas pipeline, the Mountain Valley Pipeline, threatening to further pollute pristine waterways with erosion. Meanwhile, in neighboring North Carolina, experts are warning that Hurricane Florence could kill thousands of farm animals and trigger catastrophic waste spills from sewage treatment plants, toxic coal ash ponds, hog waste lagoons and chicken farms.

Many of the factory hog farms in North Carolina store their waste by spraying it on nearby fields and neighborhoods or by depositing it in lagoons, which can overflow during hurricanes, causing the toxic pig manure to pour into nearby waterways.