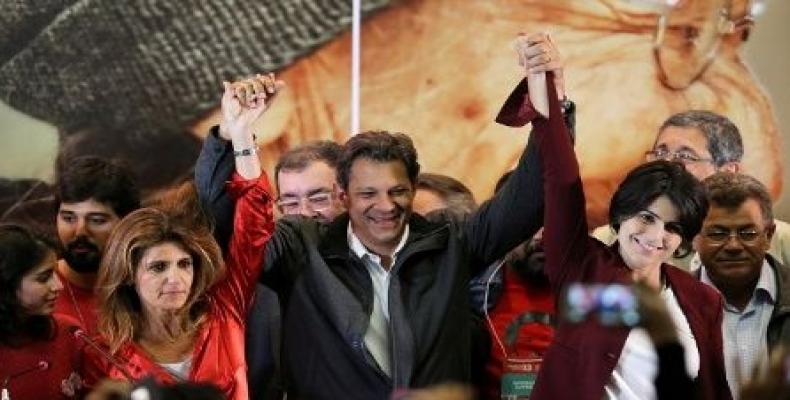 Brasilia, October 16 (RHC)-- During an interview with the Spanish newspaper El Pais, Brazilian presidential candidate Fernando Haddad spoke primarily about his opponent and democracy in Brazil, among other issues.

“He is the creepiest guy I have ever met in my public life,” said the leader of Workers’ Party (PT), while commenting on Jair Bolsonaro during the interview.  His comments come just two weeks before the second round of the Brazilian presidential elections to be held on October 28th.

Speaking about the growth of support for Jair Bolsonaro, Haddad said it can be traced back to a number of international events following 2008 that had the effect of emboldening extreme right-wing politics in Brazil.  He mentioned Brexit and rise of Trump as having an influence and argued that while the U.S. is witnessing neo-Nazism, Brazil is facing neo-Fascism.

Haddad went on to say that Bolsonaro is not a democrat because a democrat would accept defeat in elections in contrast with Bolsonaro’s infamous comments he made ahead of the election's first round saying he would not accept defeat.

“Bolsonaro has the advantage of not lying for 28 years as a deputy. He is lying now.  He said he would close Congress if he were president; that he would have to prevent his children from marrying an Afro-descendant because he had educated them well; that the people of the LGBT community are despicable and have to throw themselves away.  He has never hidden his opinions,” said the candidate adding that due to election campaigns, Bolsonaro is controlling himself and not expressing such opinions openly.

Criticizing Bolsonaro’s sexist approach, Haddad said: “A person who says he would not rape a colleague because she does not deserve it.  What does that mean?  That there are women who deserve to be raped?  What is the meaning of these expressions?”

All these, along with his other tactics, Haddad fears that Brazilian democracy is at risk.  Brazilian institutions have not been solid for the past five years according to the interviewee and with having a figure like Bolsonaro at the helm of government, “anything can happen. … Nothing is ruled out.”

Referring to different political parties evolving views on deciding whom to support in the second round, Haddad slammed former President Fernando Henrique Cardoso for being neutral.   “But I am surprised that the people who fought for re-democratization remain neutral before a person who manifestly supports dictatorship and torture,” he argued.

Other than that, he “cares less about the political parties, especially the center-right parties” and dedicated himself “to recomposing the unity of the field to which I belong, which is the progressive field: the Labor Democratic Party (PDT), the Brazilian Socialist Party (PSB), the Socialism and Freedom Party (PSOL), trade union centers, progressive leaders, movements of civil society.”

Speaking about whether former President Lula da Silva will be pardoned if Bolsonaro comes to power, an amused Haddad said: “Lula has not asked for it.  It's funny that they ask me to position myself on something the president has not asked for.  He just asks for a fair trial.”

When asked about corruption in PT and party members being involved in corruptions, Haddad said that people who have committed crimes are paying for those through legislative mechanisms brought by their own party.

Talking about a possible minister of economy, Haddad said he would act as such until a proper minister is appointed.  "I'm from this area, I know interesting economists and I'm talking to them.  But the minister has to be a leader who understands economics."