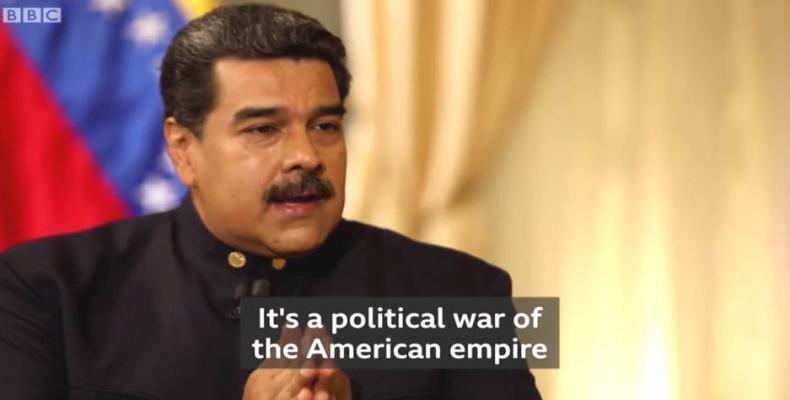 Caracas, February 13 (RHC)-- Venezuelan President Nicolas Maduro said the United States is trying to create a humanitarian crisis in the Bolivarian Republic and now using 'humanitarian aid' as a justification for military intervention.

“Venezuela is a country that has dignity, and the United States has intended to create a humanitarian crisis in order to justify military intervention, calling it 'humanitarian.'  And this is part of that show,” President Nicolas Maduro said during an interview with the BBC.

“That's the reason that we, with dignity, tell them that the minuscule crumbs that they intend to bring with toxic food, with leftovers that they have, we tell them no!  Venezuela has dignity, Venezuela produces and works and our people do not beg from anyone.”

He called the U.S. President a “white supremacist” who, along with other right-wing extremists in the White House, are waging a war against Venezuela.  "It's a political war of the United States empire, of the interests of the extreme right that today is governing that country, of the Ku Klux Klan that rules the White House, to take over Venezuela," said the democratically-elected leader of the South American country.

Nicolas Maduro said that there is clearly a racist dimension to Washington’s ongoing campaign in Venezuela, since the U.S. is currently led by an openly white supremacist president and similarly minded extremists.  Maduro told the BBC's Orla Guerin that Donald Trump is a white supremacist, "publicly and openly."  The Venezuelan president said: "He has encouraged fascist tendencies, the neo-fascists and neo-Nazis within the United States, in Europe, in Latin America."

The United States supported the failed coup attempt by lawmaker Juan Guaido who illegally declared himself the “interim president” of Venezuela on January 23rd.

When questioned of hunger in Venezuela, the president said it is a creation by the Western media which are only interested in showing the 4.4 percent of extreme poverty and also a fault of the U.S. imposed sanctions on the country.   Calling out the lie of 'humanitarian aid' for “hungry” people of Venezuela, he said: “It's very simple if you want to help Venezuela.  Release the billions of dollars in resources that belong to us.  So don't come with a cheap show, a show of indignity, of humiliation, where they offer $20 million dollars in food that is toxic and rotten.”

He also called out BBC itself along with other Western Media like CNN who have a pre-conceived notion about Venezuela and they report false data, “because you are in the script, to intervene in our country.”

President Maduro said that the West would not be so interested in Venezuela if it’s main economic source would be something else, but it is because of oil and gold that Venezuela is being attacked.