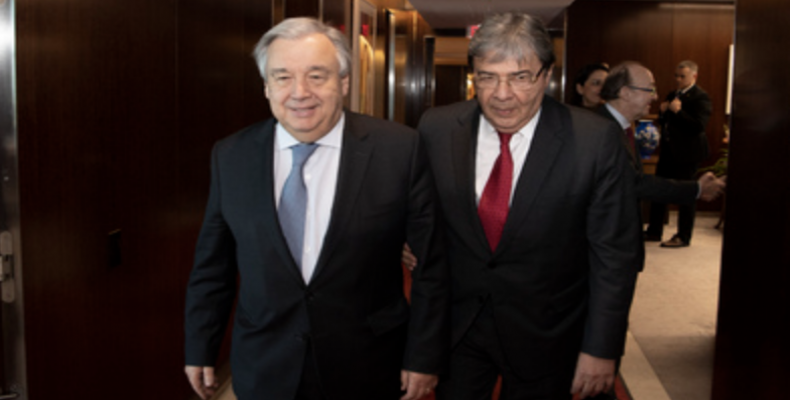 United Nations, March 14 (RHC)--The objections of the Colombian president, Iván Duque, to the Statutory Law of the Special Jurisdiction for Peace (JEP) is generating concern at the United Nations.

During an encounter with Colombian Foreign Minister, Carlos Holmes, at UN Headquarters, Secretary General Antonio Guterres reiterated his concern about the issue and highlighted the importance of the Special Jurisdiction for Peace, Prensa Latina reports.

Holmes explained to the UN Chief the reasons the Colombian president is raising to veto several articles of the legal base, aimed at establishing a mechanism of transitional justice.

Guterres expressed hope that swift actions will be implemented so that this legal base is established as soon as possible and thus guarantee the rights of the victims and the security of all the interested parties.

After his meeting with Guterres, Trujillo said that the presidential objections will be discussed in Congress to strengthen the JEP and protect the rights of the victims to truth, justice, reparation and non-repetition.

The six articles refuted by Duque address issues ranging from material reparation to the victims, to issues of extradition of ex-combatants and the role of the National General Prosecutor and the High Commissioner for Peace.

Known as Special Justice for Peace, the JEP is the mechanism of transitional justice through which to investigate and judge those who have participated in the Colombian armed conflict.

Duque’s  announcement last Sunday of the objections to the statutory law of the JEP generated strong criticism and rejection in different sectors of Colombian society.