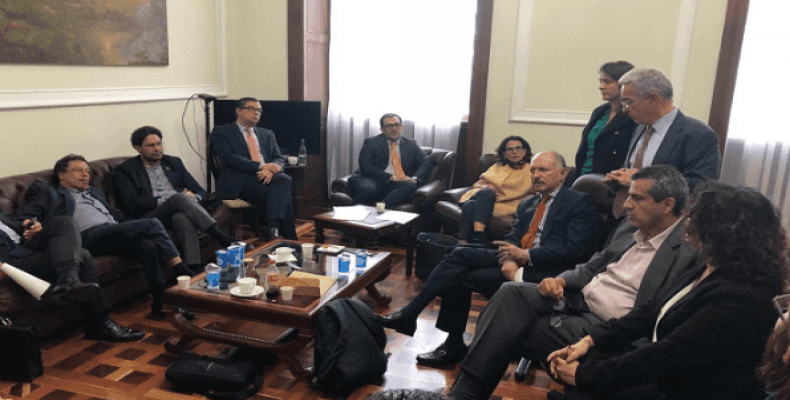 The core of the reforms is the establishment of special courts within the JEP that would be in charge of the investigations and hearings for members of state forces. Before now, Uribe had not recognized the legitimacy of the JEP despite it being the central element of the peace accords signed between the Colombian state and the Armed Revolutionary Forces of Colombia (FARC).

Now, he is willing to recognize the court and its jurisdiction if the special courts are set up a proposal that has generated criticism by those who have historically supported the peace process and argue the reform would amount to the “dismemberment” of the peace accords.

The meeting also included the former presidential candidate for the Humane Colombia coalition and now senator Gustavo Petro and senator Ivan Cepeda, two of Uribe’s strongest opponents who have denounced Uribe’s alleged role in the rise of paramilitary forces in Colombia and the murder of hundreds of civilians by the Armed Forces.

Cepeda stressed via Twitter that “any modification that bring structural and procedural changes to the @JEP_Colombia and that promote the negation of the victims’ rights is unacceptable. I believe we bust dialogue to consolidate peace but without affecting Peace, Justice, and Reparations.”

During the negotiations, those who oppose the reforms proposed as an alternative to reinforce the court with new justices who would not be chosen by foreigners and would be both experts on International Humanitarian Law and the protocols used by Colombia’s Armed Forces. This option seeks to address what Uribe and his supporters have called the JEP ideological bias against state forces (military and police).

Uribe was accompanied by senators of the Democratic Center and president Ivan Duque’s interior minister Nancy Patricia Gutierrez, who attended the meeting as an “impartial observer.”

Gutierrez was the first to leave the meeting claiming there would be no agreement.  Tensions were high among the two bands but also between Uribistas and Duque’s government.  Duque had expressed his support for the creation of special courts during the presidential campaign when he enjoyed Uribe's and the Democratic Center’s endorsement.

President Duque has not referred to the proposed reforms but his Defense Minister Guillermo Botero and Interior Minister expressed their support for the bill earlier this week.

Colombia’s Movement of Victims of State Crimes (Movice) urged “no political agreement should allow the creation of a special court for the military in @JEP_ Colombia.  The victims and our rights are at the center of the peace accords. No more space for impunity in state crimes!”