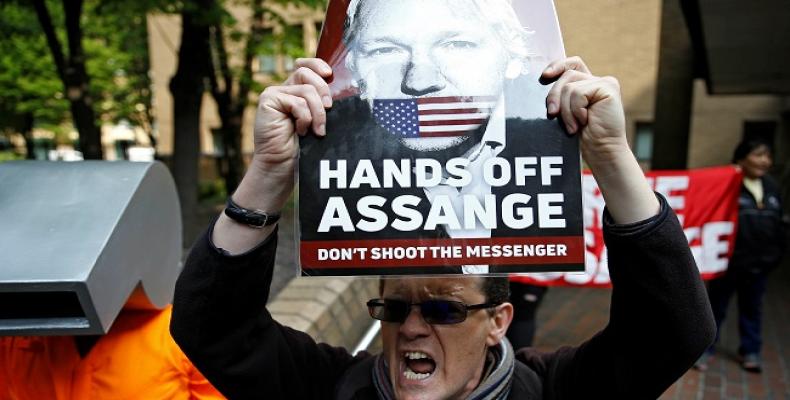 London, May 1 (RHC)-- WikiLeaks founder Julian Assange was sentenced to 50 weeks in jail by a London court on Wednesday for skipping bail.

“I apologize unreservedly to those who consider that I have disrespected them by the way I have pursued my case. This is not what I wanted or intended,” Assange said in a letter read out by his lawyer, Mark Summers.

“I found myself struggling with terrifying circumstances for which neither I nor those from whom I sought advice could work out any remedy. I did what I thought at the time was the best,” Assange said.

Summers told the court that Assange had “strongly held fears” in 2012 that he would be sent from Sweden to the United States and ultimately to the Guantanamo Bay detention center in Cuba.

Summers cited the arrest and treatment of Chelsea Manning, a U.S. Army soldier who served seven years in military prison for leaking classified data while she was working as an intelligence analyst in Iraq.

Assange’s lawyer said Manning, who is transgender, had been subjected to sleep deprivation and forced to parade naked in front of military personnel.

Meanwhile, WikiLeaks founder Julian Assange's defense lawyer filed a complaint before Ecuador's Attorney General against several members of its diplomatic mission in the United Kingdom (U.K.) for alleged espionage inside the embassy during his asylum in London.

According to Carlos Poveda, Assange's lawyer, crimes were committed and about 10 people are connected in a case that is related to alleged extortion resulting from documents and information being passed on to third parties.

One day before Assange's arrest, WikiLeaks said video, audio, photographs, copies of private legal documents and even a medical report turned up in Spain, where a group threatened to start publishing unless they were paid $3.4 million.

On April 11, Assange's seven-year asylum was abruptly removed by the Lenin Moreno administration and then arrested by British police.

Immediately the U.S. charged him with "computer hacking conspiracy," over an allegation he conspired with former army intelligence analyst Chelsea Manning to break into a classified government computer.  His defense is also fighting the extradition bid from the U.S.