At least three Palestinians killed by Israeli airstrike, another dies of wounds in Gaza protest 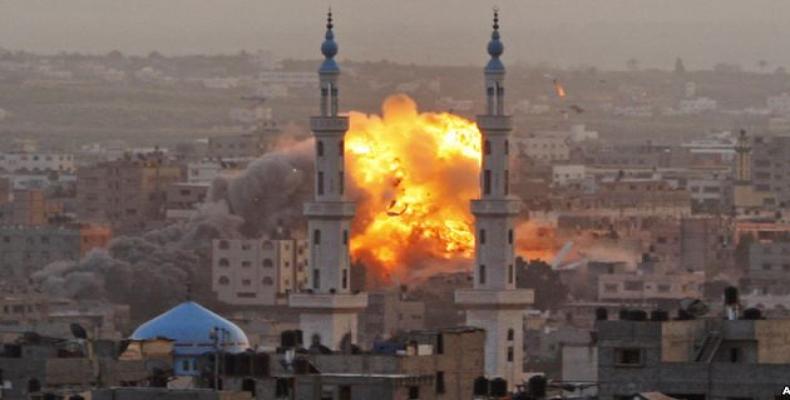 Ramallah, May 4 (RHC)-- At least three Palestinians have been killed in an Israeli air raid on the Gaza Strip shortly after Israeli soldiers attacked Palestinians taking part in the weekly “Great March of Return” rallies, leaving one protester dead and at least 50 others injured.

Palestinian sources confirmed on Friday that Israeli aircraft had targeted a position belonging to the Palestinian resistance in the al-Maghazi refugee camp, located in the center of the Gaza Strip.

The attack reportedly killed two members of Hamas' military wing, known as the Ezzedine al-Qassam Brigades.  The airstrike also injured three other Gazans.  Israeli sources also reported that the Israeli military had shelled the Bureij refugee camp at the center of the Gaza Strip.

The attacks came shortly after two Israeli soldiers were wounded by alleged sniper fire on the Gazan border.  Palestinian resistance groups have vowed to respond to the attacks.

Damascus strongly condemned the move and called it a "blatant attack on the sovereignty and territorial integrity" of Syria.

The decision was also denounced by the Arab League which stated that "Trump's recognition does not change the area's status."

The Friday protest comes as Palestinians in Gaza have been holding weekly rallies to demand the right to return for those driven out of their homeland by Israeli aggression and an end to the siege on the enclave since March last year.   More than 270 Palestinians have been killed since then, and over 16,000 have been injured.

A United Nations (UN) fact-finding mission found earlier that Israeli forces committed rights violations during their crackdown against the Palestinian protesters in Gaza that may amount to war crimes.

The Gaza Strip has been under an Israeli siege since June 2007, causing a decline in living standards as well as unprecedented unemployment and poverty.