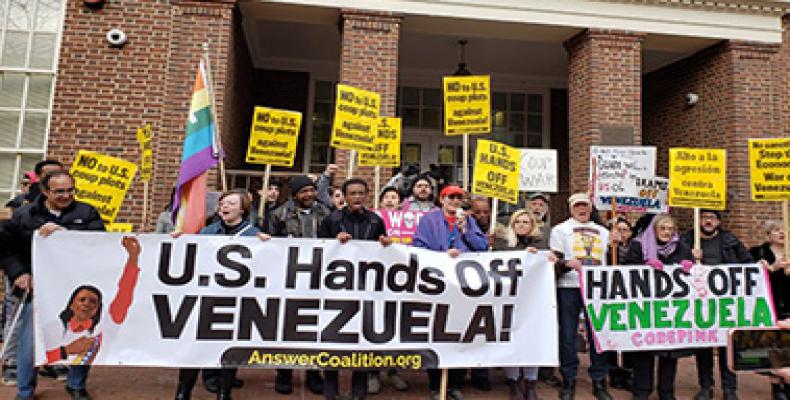 Washington, May 13 (RHC)-- The government of the United States is blatantly violating the Vienna Convention on Diplomatic Relations, with its attempt to evict the members of the protection collective made up of by US activists who are protecting the Venezuelan Embassy.

Carlos Ron Ramirez, Venezuela´s deputy foreign minister for North America told teleSUR that the Nicolas Maduro government has not authorized the entry of police into the premises of the Embassy building and said that events on Monday evening are yet another violation of international law by U.S. authorities.

“Article 45 of the Vienna Convention stipulates that even in the case that diplomatic relations are broken off, the venue of diplomatic mission is unchallengeable and its immunity remains,” added the diplomat, who recalled, however, that U.S. authorities are well known for their total disregard for international law.

Referring to the Embassy Protection Collective, Ron added that it has been subjected to all kind of pressures like the deprivation of food, medication, electricity and water, in what amounts to psychological warfare.

The Venezuelan deputy foreign minister stressed that the members of the collective currently inside the embassy are not trespassing, they were invited inside the Embassy by the legitimate and constitutional authorities of Venezuela.

Earlier on Monday evening, Washington D.C. police broke the padlocks to the main entrance of the embassy to deliver an eviction notice.

The four U.S. pro-Venezuela activists inside the building have not acknowledged receipt of the notice.

Carlos Ron Ramirez commended their resistance and willingness not to cave in to the police pressures which he compared to the gallantry of the Venezuelan people in their willingness to firmly face any threat or aggression by the U.S. Empire.