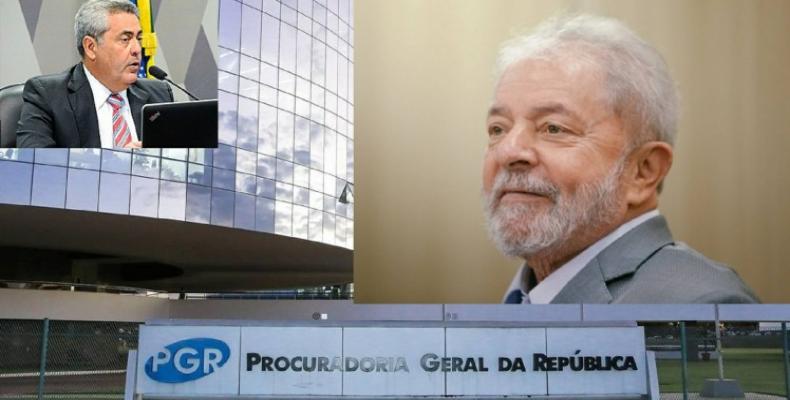 Brasilia, July 18 (RHC)-- Representatives of social movements took to the streets in several cities of Brazil Wednesday to demand the immediate release of former President Luiz Inácio Lula da Silva, who has been imprisoned at the Federal Police Headquarters in Curitiba since April 2018.

In Brasilia, the member of the agrarian sector of the Workers' Party (PT), Samuel Carvalho, indicated that "Lula Libre" committees were created to protest in front of the headquarters of the Public Ministry in rejection of the irregularities in the investigation of the Lava Jato case.

"In addition to Brasilia there are nine other cities that confirmed the celebration of rallies to demand the annulment of Lula's conviction, based on the report byThe Intercept, which shows the political persecution against the former president, he said.

Carvalho considers that one of the challenges is to transmit to the people the reality of the persecution that occurs in the country, as well as the consequences of the neoliberal policies implemented by the Government of Jair Bolsonaro.

"Our challenge is to talk to people so that they understand that Lula was persecuted to end the policies of social inclusion and justice for the people," implemented during the administrations of Lula and Dilma Rousseff.

Meanwhile, the  Brazilian Attorney General´s office estimated that the performance of Sérgio Moro as judge did not hurt Luiz Inácio Lula da Silva in the case of the triplex apartment in Guarujá.

In an opinion delivered to the Superior Court of Justice (STJ), Deputy Attorney Nívio de Freitas refuted Lula's defense request that the conviction for the triplex case be annulled, Prensa Latina reports.

The lawyers of the PT former leader quoted  the messages and conversations published by The Intercept website in which it is demonstrated the partiality and lack of ethics of Moro to incriminate and condemn Lula.

However, the Federal Public Ministry affirms that such dialogues are illegal and would not demonstrate an irregular performance of the former magistrate, and current Minister of Justice and Security.

For De Freitas, you can not support a request for annulment 'just based on newspaper articles'.