Salvadoran rape victim jailed for stillbirth not guilty of murder 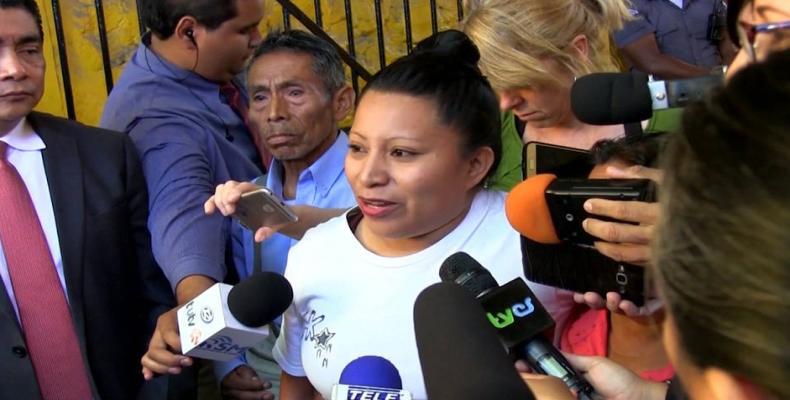 San Salvador, August 20 (RHC)-- El Salvador rape survivor Evelyn Hernandez was found not guilty of charges of aggravated homicide by a Salvadoran court Monday in a case that was the latest win for feminist activists fighting to end the criminalisation of women suspected of having abortions.

Prosecutors asked for a 40-year sentence during the retrial of 21-year-old Hernandez, who was the latest woman to go to trial for an abortion-related crime in El Salvador, a country that enforces its total abortion ban with a harshness unseen in nearly every other country.

"Justice for Evelyn was delayed and denied for too long, but today the courts determined what we already knew to be true: Evelyn is innocent," said Paula Avila-Guillen, a human rights lawyer and director of Latin American initiatives at the Women's Equality Center, in a press release sent to Al Jazeera.

Hernandez experienced a stillbirth in April 2016 at her home in a rural part of El Salvador. She said she did not know she was pregnant at the time and that the pregnancy was the result of a rape. Nonetheless, prosecutors accused her of aggravated homicide. In her first trial that ended in July 2017, she was sentenced to 30 years in prison.

The country's supreme court annulled her sentence in December 2018 based on a lack of evidence and ordered a retrial. Hernandez was released from prison in February 2019 to await the verdict of her case. She spent nearly three years behind bars before she was released.

"I've always said that I'm innocent," Hernandez told reporters outside the court on Thursday when the retrial resumed. "My goal is to continue studying."

Dozens of women in El Salvador have been imprisoned for abortion-related crimes since the country made abortion illegal in all circumstances in 1998. Many are accused of aggravated homicide in cases that lawyers and activists say are really obstetric emergencies. Most of the women are from poor, rural areas of El Salvador where they have limited access to quality healthcare.  A group of lawyers have worked to provide free legal counsel to these women, who often cannot afford a lawyer.

Hernandez's case was the first to go to trial under the administration of recently elected Salvadoran President Nayib Bukele, who took office in June 2019.  During his campaign, Bukele said that he opposed sending women to prison for obstetric emergencies.  Despite pressure from feminist activists, Bukele has not made a public statement about the case.  The office of the president declined to provide a comment on the case to Al Jazeera.